Researchers from Chalmers University of Technology, Sweden, have discovered a simple new tweak that could double the efficiency of organic electronics. OLED-displays, plastic-based solar cells and bioelectronics are just some of the technologies that could benefit from their new discovery, which deals with "double-doped" polymers.

The majority of our everyday electronics are based on inorganic semiconductors, such as silicon. Crucial to their function is a process called doping, which involves weaving impurities into the semiconductor to enhance its electrical conductivity. It is this that allows various components in solar cells and LED screens to work.

For organic - that is, carbon-based - semiconductors, this doping process is similarly of extreme importance. Since the discovery of electrically conducting plastics and polymers, a field for which a Nobel Prize was awarded in 2000, research and development of organic electronics has accelerated quickly. OLED-displays are one example which are already on the market, for example in the latest generation of smartphones. Other applications have not yet been fully realised, due in part to the fact that organic semiconductors have so far not been efficient enough.

But now, in an article in the scientific journal Nature Materials, Professor Christian Müller and his group, together with colleagues from seven other universities demonstrate that it is possible to move two electrons to every dopant molecule.

"Through this 'double doping' process, the semiconductor can therefore become twice as effective," says David Kiefer, PhD student in the group and first author of the article.

According to Christian Müller, this innovation is not built on some great technical achievement. Instead, it is simply a case of seeing what others have not seen.

"The whole research field has been totally focused on studying materials which only allow one redox reaction per molecule. We chose to look at a different type of polymer, with lower ionisation energy. We saw that this material allowed the transfer of two electrons to the dopant molecule. It is actually very simple," says Christian Müller, Professor of Polymer Science at Chalmers University of Technology.

The discovery could allow further improvements to technologies which today are not competitive enough to make it to market. One problem is that polymers simply do not conduct current well enough, and so making the doping techniques more effective has long been a focus for achieving better polymer-based electronics. Now, this doubling of the conductivity of polymers, while using only the same amount of dopant material, over the same surface area as before, could represent the tipping point needed to allow several emerging technologies to be commercialised.

"With OLED displays, the development has come far enough that they are already on the market. But for other technologies to succeed and make it to market something extra is needed. With organic solar cells, for example, or electronic circuits built of organic material, we need the ability to dope certain components to the same extent as silicon-based electronics. Our approach is a step in the right direction," says Christian Müller.

The discovery offers fundamental knowledge and could help thousands of researchers to achieve advances in flexible electronics, bioelectronics and thermoelectricity. Christian Müller's research group themselves are researching several different applied areas, with polymer technology at the centre. Among other things, his group is looking into the development of electrically conducting textiles and organic solar cells. 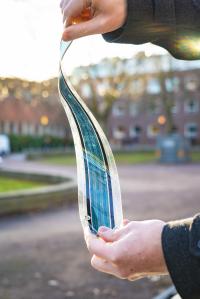