Gut microbes play wide-ranging roles in health and disease, but there has been a lack of tools to probe the relationship between microbial activity and host physiology. Two independent studies in mice published April 20 in the journal Cell have overcome this hurdle, making it possible to simultaneously visualize multiple bacterial strains in the gut by making them express unique combinations of fluorescent proteins. This approach allowed the researchers to pinpoint the location of the bacteria in the gut based on the rainbow of colors they emitted. Additionally, these tools also allowed precise control of the activity of bacterial genes in real time and in specific locations.

"We found that tools from synthetic biology can allow us to ask new questions about the gut microbiota," says Andrew Goodman of Yale University School of Medicine, senior author of one of the studies. "We also imagine these strategies may provide a starting point for on-demand delivery of therapeutics or other molecules from the microbiota."

Advances in sequencing technology have enabled in-depth characterization of bacterial species found in the gut, but tools to manipulate the gut microbiome have lagged far behind. Although tools have been developed for model organisms such as Escherichia coli, these systems do not work in Bacteroides, the most abundant genus within the guts of people in the United States.

In one of the studies, Justin Sonnenburg of the Stanford University School of Medicine and his team developed a way to engineer Bacteroides, making it possible to simultaneously track multiple bacterial strains in the gut. These tools included a panel of synthetic promoters--DNA sequences that initiate transcription of particular genes.

Using this panel of promoters, the researchers genetically engineered six different Bacteroides species to produce unique combinations of a red fluorescent protein (RFP) called mCherry and green fluorescent protein (GFP). They introduced the engineered species into mice that had been raised in a germ-free environment, and after two weeks, they analyzed sections of colon tissue using a fluorescence microscope to pinpoint the location of the bacteria in different parts of the gut.

In future research, Sonnenburg and his team will continue to develop these tools to engineer bacteria to produce proteins at a precise time or location. "On the commercial side, the expression tools may allow us to deliver therapeutic proteins to the gut by producing them in the microbes that live inside of us," says Weston Whitaker, lead author of the Stanford study. "The use of bacterial cells for drug delivery opens the door to smart therapeutics that are produced at the right time and location."

In the other study, Yale's Andrew Goodman and his team also developed a panel of synthetic promoters enabling the fine-tuned control of gene activity in diverse Bacteroides species. The researchers integrated these promoters into the Bacteroides genome and modulated gene activity using a tetracycline-regulated system, which allows transcription to reversibly turn on or off depending on the presence of a synthetic compound called anhydrotetracycline.

If extended to humans, this approach could potentially enable on-demand delivery of therapeutic compounds. Moreover, precise control of bacterial gene activity in specific locations in the gastrointestinal tract could be achieved by administering anhydrotetracycline through different routes, for example, via time- or pH-dependent delayed release capsules or surgically through catheterization. In future studies, Goodman and his team will apply their system to other microbes and other types of interactions between gut microbes and their hosts.

"These tools open the door to new types of studies to better understand our microbiota and to define how gut commensal bacteria can be engineered for therapeutic purposes," Sonnenburg says. "However, before gut commensals can be engineered for therapeutics, it will be important to develop methods of safely and reliably colonizing the human gut, which will require more research."

This work was funded by Stanford's Discovery Innovation Fund in Basic Biomedical Sciences, the National Institutes of Health NIDDK, the National Science Foundation, and the Crohn's and Colitis Foundation of America. Three co-authors are founders of Novome Biotechnologies and have filed a provisional patent based on the work.

This study was funded by grants from the National Institutes of Health, the Burroughs Wellcome Fund, the DuPont Young Professors, Pew Scholars, and HHMI Faculty Scholars Programs.

New tools visualize where bacterial species live in the gut, control their activity 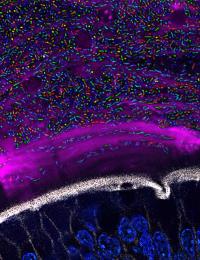 <i>Bacteroides</i> Species in the Mouse Gut 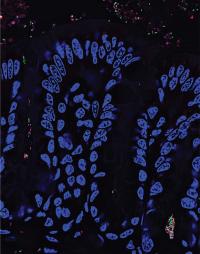