BUFFALO, N.Y. -- A massive, wolf-sized otter that lived about 6 million years ago may have been a dominant predator in its time, according to a new study analyzing the animal's jaws.

The research provides insight into the ecological niche that the oversized creature may have filled in the wetlands of southwest China, where it lived. The otter, Siamogale melilutra, weighed about 110 pounds -- bigger than any living otter.

"We started our study with the idea that this otter was just a larger version of a sea otter or an African clawless otter in terms of chewing ability, that it would just be able to eat much larger things. That's not what we found," says Z. Jack Tseng, PhD, who led the project. Tseng is an assistant professor of pathology and anatomical sciences in the Jacobs School of Medicine and Biomedical Sciences at the University at Buffalo, and a research associate with the American Museum of Natural History and the Natural History Museum of Los Angeles County.

When scientists used computers to simulate how biting would strain S. melilutra's jaws, they concluded that the animal had much firmer jaw bones than expected. This stiffness would have given the otter a surprisingly strong bite -- even for its size.

"We don't know for sure, but we think that this otter was more of a top predator than living species of otters are," Tseng says. "Our findings imply that Siamogale could crush much harder and larger prey than any living otter can."

Modern otters have a varied diet, with different species dining on foods that range from plants and rodents to fish, crabs and clams. Based on the new study's findings, S. melilutra's jaws would have been strong enough to crush the shells of big mollusks or the bones of birds and small mammals like rodents, though what exactly it ate is unknown.

Additional images not available through EurekAlert! may be obtained by contacting Charlotte Hsu in UB Media Relations at chsu22@buffalo.edu.

To better understand S. melilutra, Tseng and colleagues compared the prehistoric critter to its living counterparts.

The team used computed tomography (CT) scans of skulls to create 3-D, computerized models showing how the jaw bones of 10 of the 13 known living otter species bend under biting forces. (One rare otter was left out because researchers could not find bones to scan, and two others were excluded due to their similarity to other species).

The team also made a model for S. melilutra, using CT scans of fossils as a guide. The work included a painstaking, digital reconstruction of the cranium based on a crushed fossil.

A comparison of all the otter jaw simulations revealed a linear relationship between jaw stiffness and animal size: Smaller otters had sturdier jaws. But S. melilutra was an outlier: The massive mammal's modeled jaws were six times sturdier than expected. This strength, paired with the creature's size, would have made it a formidable hunter.

"At the time that the otter lived, the area where its remains were found included a swamp or a shallow lake surrounded by evergreen forest or dense woodland," said Su, a paleoecologist at the Cleveland Museum of Natural History and one of the leaders of the Shuitangba Project that discovered the fossil otter. "There was a diverse aquatic fauna at Shuitangba, including fish, crab, mollusks, turtles and frogs, as well as many different species of water birds, all of which could have been potential prey for S. melilutra."

In this wet and forested environment, the otter's jaw power could have given it an edge over predators that could not hunt in water or smash the shells of aquatic prey.

"Carnivores are known to evolve powerful jaws, often for the purpose of cracking the bones of their prey," said Wang, a curator in the Vertebrate Paleontology Department of the Natural History Museum of Los Angeles County. "In the shallow swamp of South China, it's possible that an abundance of big clams drove these giant otters to acquire their rare traits, including their crushing teeth and robust jaws." Wang, along with Su, White and Ji, was a member of the research team that first reported the discovery of the giant otter's fossils in January.

Besides providing insight into S. melilutra, the new study raises general questions about the relationship between jaw power and diet in animals.

Typically, scientists expect to find more powerful jaws in creatures that eat harder foods. But according to the new study, these two traits don't match up in living otters: Jaw strength correlated with size, regardless of meal choice.

Tool use may help explain this discrepancy, allowing some otters with a relatively weak bite to tackle tough foods: "Sea otters, for example, swim on their backs and use their chests as a platform for crushing their food with stones," Tseng says.

But tool use can't completely account for the pattern that the scientists saw, and more research needs to be done to understand the unexpected trend.

For now, Tseng believes it's still possible to draw some conclusions about S. melilutra based on its unusual mandibular strength. "We think the anatomy means something because it doesn't fall within the usual pattern that we see in other otters," he says. "The strong jaws suggest that the primitive otter probably did not have the tool-using capability, and combined with the giant size, it was likely a top predator." 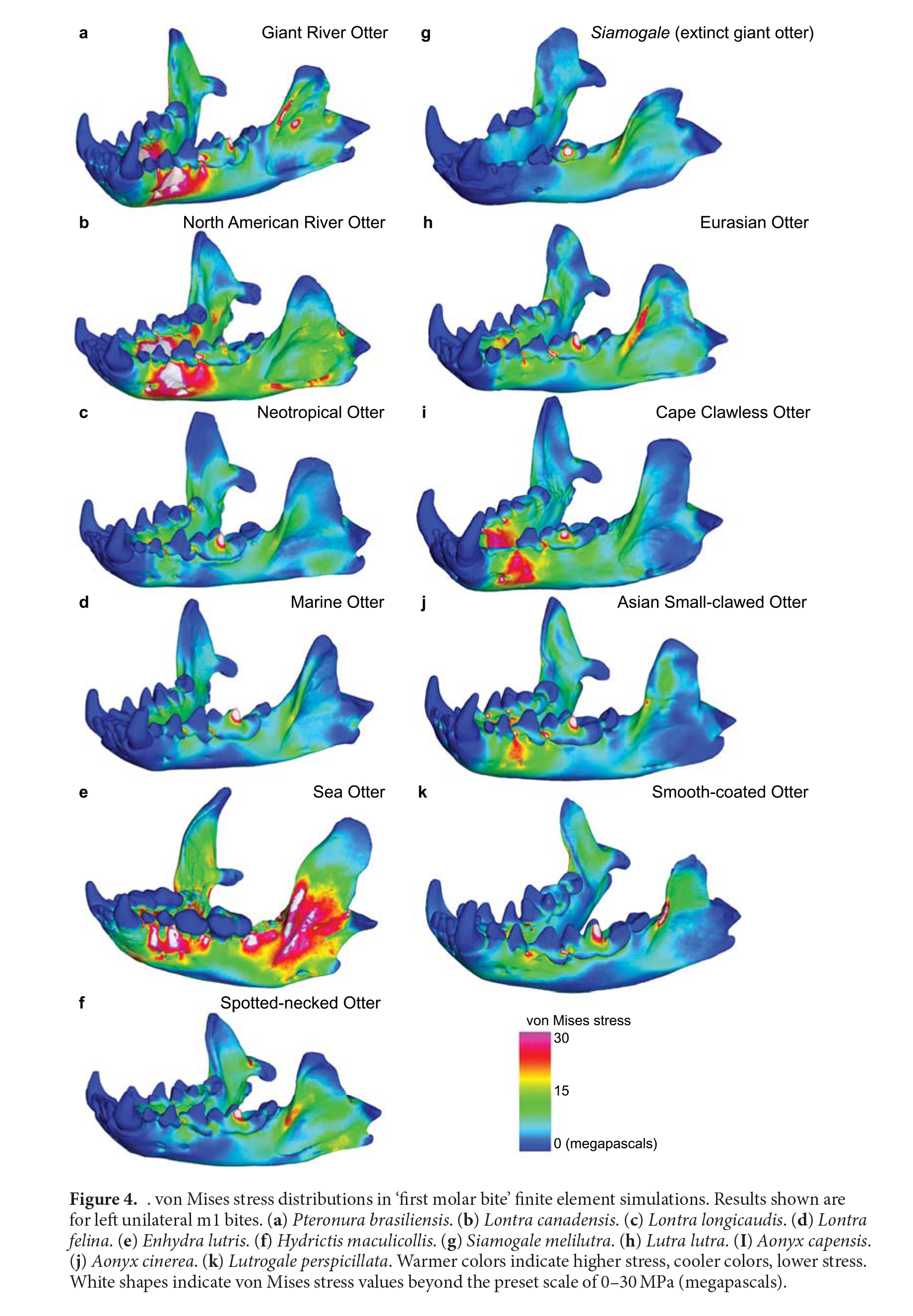