(Santa Barbara, Calif.) –– Physicists at UC Santa Barbara have made an important advance in electrically controlling quantum states of electrons, a step that could help in the development of quantum computing. The work is published online today on the Science Express Web site.

The researchers have demonstrated the ability to electrically manipulate, at gigahertz rates, the quantum states of electrons trapped on individual defects in diamond crystals. This could aid in the development of quantum computers that could use electron spins to perform computations at unprecedented speed.

Using electromagnetic waveguides on diamond-based chips, the researchers were able to generate magnetic fields large enough to change the quantum state of an atomic-scale defect in less than one billionth of a second. The microwave techniques used in the experiment are analogous to those that underlie magnetic resonance imaging (MRI) technology.

The key achievement in the current work is that it gives a new perspective on how such resonant manipulation can be performed. "We set out to see if there is a practical limit to how fast we can manipulate these quantum states in diamond," said lead author Greg Fuchs, a postdoctoral researcher at UCSB. "Eventually, we reached the point where the standard assumptions of magnetic resonance no longer hold, but to our surprise we found that we actually gained an increase in operation speed by breaking the conventional assumptions."

While these results are unlikely to change MRI technology, they do offer hope for the nascent field of quantum computing. In this field, individual quantum states take on the role that transistors perform in classical computing.

"From an information technology standpoint, there is still a lot to learn about controlling quantum systems," said David Awschalom, principal investigator and professor of physics, electrical and computer engineering at UCSB. "Still, it's exciting to stand back and realize that we can already electrically control the quantum state of just a few atoms at gigahertz rates –– speeds comparable to what you might find in your computer at home."

The work was performed at UCSB's Center for Spintronics and Quantum Computation, directed by Awschalom. Co-authors on the paper include David. M. Toyli and F. Joseph Heremans, both of UCSB. Slava V. Dobrovitski of Ames Laboratory and Iowa State University contributed to the paper. 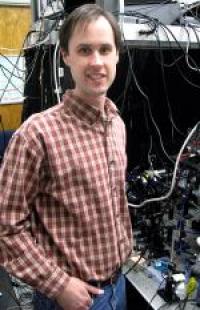