A new study offers an explanation for the extraordinary run of wet summers experienced by Britain and northwest Europe between 2007 and 2012. The study found that loss of Arctic sea ice shifts the jet stream further south than normal resulting in increased rain during the summer in northwest Europe.

Dr James Screen from the University of Exeter used a computer model to investigate how the dramatic retreat of Arctic sea ice influences the European summer climate. He found that the pattern of rainfall predicted by the model closely resembles the rainfall pattern of recent summers. The study is published in the journal Environmental Research Letters.

Dr Screen said: "The results of the computer model suggest that melting Arctic sea ice causes a change in the position of the jet stream and this could help to explain the recent wet summers we have seen.

"The study suggests that loss of sea ice not only has an effect on the environment and wildlife of the Arctic region but has far reaching consequences for people living in Europe and beyond."

Jet streams are currents of strong winds high in the atmosphere – around the height at which aeroplanes fly. These winds steer weather systems and their rain. Normally in summer the jet stream lies between Scotland and Iceland and weather systems pass north of Britain. When the jet stream shifts south in summer, it brings unseasonable wet weather to Britain and northwest Europe causing havoc for tourism and farming.

The model suggests that while summer rainfall increases in northwest Europe, Mediterranean regions will receive less rain. The effects are not limited to Europe - weather systems as far as North America could also be influenced.

The annual average extent of Arctic sea ice is currently declining at about half a million square kilometres per decade – equivalent to about twice the area of the UK. The study compared weather patterns during low sea ice conditions as seen in recent years to weather patterns during high sea ice conditions typical of the late 1970s. The model did not use estimates of how much sea ice there will be in the future, and so this study cannot predict future weather. The results do suggest however that if sea ice loss continues as it has over recent decades, the risk of wet summers may increase.

Other studies have suggested that recent ocean warming of the North Atlantic could also be responsible for more summer rain in northwest Europe. It is likely that several other factors, combined with the impact of melting Arctic sea ice, explain the recent run of wet summers.

The next step is to use estimates of future sea ice loss to make predictions of how further melting could influence summer rainfall in Europe in the years to come.

This research was funded by the Natural Environment Research Council (NERC).

The paper is published in Environmental Research Letters and will be available at the following link: http://iopscience.iop.org/1748-9326/8/4/044015/article

View video footage on You Tube:

Image caption: Wet_summers.jpg: The average location of the jet stream during wet summer months over northwest Europe. The arrows represent the winds at roughly 10 kilometres above the Earth's surface. The orange and red arrows show the strongest winds that make up the jet stream.

The University has invested strategically to deliver more than £350 million worth of new facilities across its campuses in the last few years; including landmark new student services centres - the Forum in Exeter and The Exchange on the Penryn Campus in Cornwall, together with world-class new facilities for Biosciences, the Business School and the Environment and Sustainability Institute. There are plans for another £330 million of investment between now and 2016. 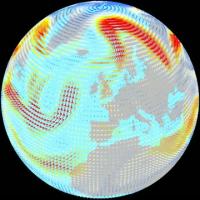