Studies in animals have raised concerns that tumors may grow faster after the anticancer drug sunitinib is discontinued. But oncologists and physicists who collaborated to analyze data from the largest study of patients with kidney cancer convincingly demonstrate that such tumor acceleration does not occur in humans. The findings, publishing online on February 7th in the Cell Press journal Cell Reports, suggest that sunitinib does not cause lingering risks for patients after their treatment ends.

"We were able to demonstrate that this applied across all patients and that those who had the greatest benefit from the drug while it was administered retained this benefit," says senior author Dr. Tito Fojo, of the National Cancer Institute at the National Institutes of Health.

Sunitinib, which is approved around the world for the treatment of several different cancers, works by targeting proteins on the blood vessels that feed tumors. Animal studies have suggested that treatment with sunitinib may induce changes in tumor vessels or adaptations within tumors themselves that could promote cancer growth and spread.

When Dr. Fojo and his colleagues analyzed more than 10,000 data points from the pivotal randomized phase 3 clinical trial that led to sunitinib's approval, the evidence clearly showed that no matter how long patients took sunitinib, it was not harmful, did not accelerate tumor growth, and did not shorten survival after treatment ended. During treatment, the drug slowed tumor growth and prolonged the patients' survival.

"Last year, I was approached by two patients who had grave concerns about taking sunitinib due to an article conducted in animals. I realized that if clinical data exist that refute basic science, they must be published," recalls Dr. Fojo.

The researchers' findings indicate that sunitinib can benefit patients without altering tumor biology after the drug is stopped. "We hope this can be generalized to similar drugs but recognize that further studies will be needed," says first author Dr. Krastan Blagoev of the National Science Foundation. "Nevertheless, other drugs also approved worldwide for a variety of cancers—including sorafenib, pazopanib, and axitinib—are similar to sunitinib, and this will give some reassurances that one need not expect things to get worse after such drugs are discontinued." 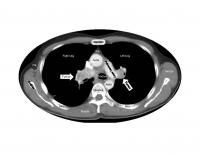 Reassuring Evidence: Anticancer Drug Does not Accelerate Tumor Growth after Treatment Ends (2 of 2)