A new study in The Auk: Ornithological Advances suggests that some birds prioritize social information over visual evidence when making breeding choices.

The quality of an environment can be difficult for a bird to assess and, therefore, continuously gathering information is a good way to stay up-to-date with breeding conditions. In this field study, researchers tested how the wild Zebra Finch (Taeniopygia guttata) is attracted to successful nest sites. They presented the Zebra Finch with different visual or acoustic cues in nest boxes, simulating the presence of small or large broods, in order to test how birds assess the quality of a potential breeding site.

When discussing the costs and benefits of social information, scientists often argue that socially acquired knowledge is less reliable and more prone to deception. The sounds made by nesting birds, however, are honest indicators of the number of chicks. Predators can use these cues to locate nests. While the calls of chicks serve as signals for the parents and siblings and (inadvertently) also as cues for predators, it is unknown whether chick calls can also function as cues for prospective breeders.

Researchers here aimed to test which social cues from the nests of Zebra Finches attract other Zebra Finches. In two separate experiments, they presented wild Zebra Finches with either acoustic cues (playback of chick calls) or visual cues (eggs) with either small or large broods. Using playbacks of chick calls or nests with unhatched eggs, respectively, allowed them to completely discern brood size from parental activity.

If the presence of fledglings in an area alone would provide all relevant information, there would be no need for wild Zebra Finches to visit nests beforehand. With this experiment, researchers tested the hypothesis that chick begging calls can serve as a source of social information for prospecting Zebra Finches. If the begging calls can also serve as indicators for breeding success, Zebra Finches should visit larger (and potentially more successful) broods more than small ones, as clutch size is correlated with reproductive success. The researchers further predicted the acoustic cues (representing nests at later stages) may be perceived as more reliable than visual cues (i.e. nests at early stages) and hence the distinction between small and large broods should be more pronounced in the nests with chick calls as cues than those with egg cues.

The results showed that more Zebra Finches visited experimental nests that were associated with playback recordings of calls of large broods (7 chicks) as opposed to calls of small broods (3 chicks). Visual cues (nests with different numbers of eggs or rocks), however, representing nests at early stages, did not influence either the probability of visits, nor number or duration of visits. This is the first evidence that calls of chicks in the nest can provide social information that influences bird breeding behavior.

This result is in accordance with the hypothesis that the wild Zebra Finch preferentially visits more successful broods. The chick calls alone provided the necessary social information to attract potential breeders.

Overall, this study provides the first evidence that wild birds can use calls from chicks at the pre-fledging stage as a social signal. This social information could be an important cue to infer breeding success. Even though the parental feeding activity at nests is a known indicator of breeding success in some species, the value of the begging calls in the nest as inadvertent social information has not been demonstrated previously.

"This study helps us understand which cues the Zebra Finches use to find the best nest site," said lead author Hanja Barbara Bandl. "Deciding in which location to build a nest is crucial for birds in order to maximize their breeding success."

The paper, "Begging calls provide social cues for prospecting conspecifics in the wild Zebra Finch (Taeniopygia guttata)," is available (at midnight EST on May 2) at: https://academic.oup.com/auk/article-lookup/doi/10.1093/auk/ukz007

To request a copy of the study, please contact: 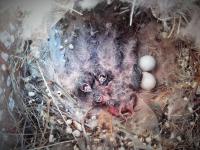