While the cleaning of car exhausts is among the best known applications of catalytic processes, it is only the tip of the iceberg. Practically the entire chemical industry relies on catalytic reactions. Therefore, catalyst design plays a key role in improving these processes. An international team of scientists has now developed a concept, that elegantly correlates geometric and adsorption properties. They validated their approach by designing a new platinum-based catalyst for fuel cell applications.

Hydrogen would be an ideal energy carrier: Surplus wind power could split water into its elements. The hydrogen could power fuel cell-driven electric cars with great efficiency. While the only exhaust would be water, the range could be as usual. But fuel cell vehicles are still a rare exception. The required platinum (Pt) is extremely expensive and the world's annual output would not suffice for all cars.

A key component of the fuel cell is the platinum catalyst that is used to reduce oxygen. It is well known that not the entire surface but only a few particularly exposed areas of the platinum, the so-called active centers, are catalytically active.

A common method used in developing catalysts and in modeling the processes that take place on their surfaces is computer simulation. But as the number of atoms increases, quantum chemical calculations quickly become extremely complex.

With their new methodology called "coordination-activity plots" the research team presents an alternative solution that elegantly correlates geometric and adsorption properties. It is based on the "generalized coordination number" (GCN), which counts the immediate neighbors of an atom and the coordination numbers of its neighbors.

Calculated with the new approach, a typical Pt (111) surface has a GCN value of 7.5. According to the coordination-activity plot, the optimal catalyst should, however, achieve a value of 8.3. The required larger number of neighbors can be obtained by inducing atomic-size cavities into the platinum surface, for example.

In order to validate the accuracy of their new methodology, the researchers computationally designed a new type of platinum catalyst for fuel cell applications. The model catalysts were prepared experimentally using three different synthesis methods. In all three cases, the catalysts showed up to three and a half times greater catalytic activity.

"This work opens up an entirely new way for catalyst development: the design of materials based on geometric rationales which are more insightful than their energetic equivalents," says Federico Calle-Vallejo. "Another advantage of the method is that it is based clearly on one of the basic principles of chemistry: coordination numbers. This significantly facilitates the experimental implementation of computational designs."

"With this knowledge, we might be able to develop nanoparticles that contain significantly less platinum or even include other catalytically active metals," says Professor Aliaksandr S. Bandarenka, tenure track professor at Technical University of Munich. "And in future we might be able to extend our method to other catalysts and processes, as well."

The research was funded by the European Union's Fuel Cells and Hydrogen (FCH) Initiative, the Netherlands Organization for Scientific Research (NWO), the German Research Council (via SFB 749, the Cluster of Excellence Nanosystems Initiative Munich (NIM) and Ruhr Explores Solvation (RESOLV)) and the Helmholtz Energy Alliance. 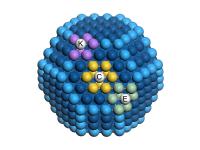