The collaborative team -- which includes electrical and computer engineering professors and more than a dozen students -- envisions a future spacesuit that could monitor astronauts' health and use body heat to power electronics. By working with a model spacesuit, the engineers are exploring how wearable medical sensors can be used in future space missions to keep astronauts healthy.

The project is supported by a three-year, $750,000 NASA grant and involves the College of Engineering's electrical and computer engineering department, the Electronic Design Laboratory and the College of Human Ecology, including the kinesiology department and the apparel, textiles and interior design department.

"This project supports a number of undergraduate and graduate students in doing systems-level engineering research and making them the technologists of the future," Kuhn said.

The project involves five parts, with several students involved in each part:

"This project is a good example of how when you do something in space, everything needs to be rethought -- human elements and nonhuman elements of the system," Warren said. "We have a lot to learn about human physiology and what happens to a person as they physically change in a reduced-gravity environment."

The engineers are using 3D electromagnetic field simulators and a spacesuit model. Because real spacesuits cost $13 million, Erin Monfort-Nelson, master's student in apparel, textiles and interior design, Iola, built a replica of the spacesuit used in the space shuttle program. The suit replica is made of multiple layers of material, including metalized fabrics to model the layers in real suits that protect astronauts and keep them warm.

Batteries are too dangerous to place in a spacesuit's oxygen-rich environment, so the team is developing new energy harvesting methods to gather energy. These methods use the temperature difference between body heat and the spacesuit's cooling garment to power radios and other electronics inside the spacesuit.

"This is a systems-level project where we bring together integrated circuit design, software design, biomedical sensors and the biology of people," Kuhn said.

Added to the communication and power challenges in space is that astronauts' bodies also change in space. Muscle mass and bone density decrease and an astronaut's vision can change. Warren is working with Thomas Barstow, professor of kinesiology, and a team of students to develop sensors that astronauts can wear to measure their health and predict fatigue onset. Studies have involved simulated lunar tasks -- such as climbing ladders or collecting rock samples -- while wearing both commercial sensors and devices developed by the Kansas State University team.

Some of these wearable body area network sensors include:

The engineers also are developing ways for these sensors to communicate with each other in the suit and to a spacesuit hub that transmits the information back to the space station.

"This project is a fantastic community and team-building effort," Warren said. "It offers a good venue to establish a local community of researchers that have a fruitful and frequent dialogue to accomplish the same goal. We can move new ideas into the classroom and teach them to students." 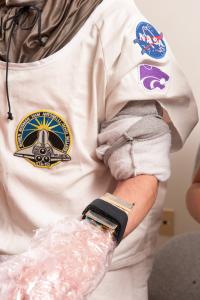