Deep sea fishes remove and store more than one million tonnes of CO2 from UK and Irish surface waters every year, according to a new study led by the University of Southampton.

This natural carbon capture and storage scheme could store carbon equivalent to £10 million per year in carbon credits.

Fish living in deep waters on the continental slope around the UK play an important role carrying carbon from the surface to the seafloor.

It is assumed that deep water fishes all depend on particles that fall from the surface for their energy. These bottom-living deep water fishes never come to the surface and the carbon in their bodies stays at the seafloor. However, at mid-slope depths there is an abundant and diverse ecosystem where a huge volume of animals make daily vertical migrations to feed at the surface during the night. The animals conducting this migration then transport nutrients from the surface back to the deep.

Researchers from the University of Southampton and Marine Institute, Ireland used novel biochemical tracers to piece together the diets of deep-water fish revealing their role in transferring carbon to the ocean depths.

They found that more than half of all the fishes living on the seafloor get their energy from animals that otherwise go back to the surface, and not from settling particles. These bottom-living fishes therefore become a carbon capture and storage facility. Global peaks in abundance and biomass of animals at mid slope depths occur because this is the depth range where the vertically migrating animals are most easily captured by fishes that live at or near the seafloor.

Lead author, Dr Clive Trueman from the University of Southampton, says: "As fishing, energy extraction and mining extend into deeper waters, these unfamiliar and seldom seen fishes in fact provide a valuable service to all of us. Recognising and valuing these ecosystem services is important when we make decisions about how to exploit deep water habitats for food, energy or mineral resources."

As it is difficult to study animals living under a kilometre or more of water, the researchers measured forms, or isotopes, of carbon and nitrogen, in the muscles of fish caught in deepwater research surveys on the continental slope west of Ireland, at water depths ranging from 500 to 1800m. These were collected on the RV Celtic Explorer, a multi-disciplinary research vessel operated by the Irish Marine Institute.

Small differences in the mass of these isotopes mean that they are processed at slightly different speeds in the body, leading to patterns which can show who eats who in the slope ecosystem. By measuring the isotopes in all of the most common species, the researchers were able to estimate how much carbon is captured and stored by these deep water fish.

The study, which is published in the journal Proceedings of the Royal Society B, was funded by the University of Southampton and the Marine Institute. 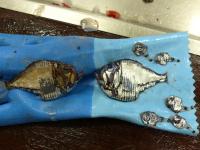 A Group of Hatchet Fish 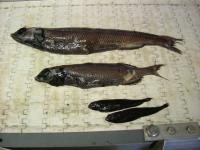