The research published in Royal Society Open Science shows that protecting important ocean habitat promotes the long-term recovery of rockfish such as cowcod and bocaccio that have long been a staple of West Coast fishermen. Favorable ocean conditions also played a role, according to the study by scientists from NOAA Fisheries' Southwest Fisheries Science Center (SWFSC), University of San Diego, and the University of Massachusetts Amherst.

"The larvae of several species of rockfish that were once heavily fished increased in number within protected areas over the past decade," said Andrew Thompson, a research scientist at the SWFSC in La Jolla, Calif. "The larvae have the potential to drift outside the protected region. That's good for fisheries because it can build populations beyond the protected waters too."

The research drew on long-running surveys of California waters by the California Cooperative Oceanic Fisheries Investigations (CalCOFI), a partnership between the California Department of Fish and Wildlife, NOAA Fisheries and the Scripps Institution of Oceanography. The collaboration began in the 1940s to study the factors behind the collapse of the California sardine fishery and continues quarterly surveys to study ocean conditions and fish populations.

"We would have never known this if not for the trove of data we get from those ships out on the water regularly looking at everything from temperature to, in this case, numbers of larval rockfish," said Kristen Koch, Acting Director of the SWFSC. "We've discovered this conservation success story thanks to long-term monitoring that gives us new insight into how the ocean works and changes."

The study used CalCOFI data to examine larval numbers of 15 rockfish species inside and outside two large protected areas southwest of Los Angeles called Cowcod Conservation Areas (CCAs), designated by NOAA Fisheries in 2001 at the recommendation of the Pacific Fishery Management Council. The CCAs prohibit fishing deeper than 110 feet, since many adult rockfish species live at such depths. Therefore, the 4,300-square-mile areas protect numerous species of rockfish in addition to cowcod.

Researchers examined trends from 1998 to 2013 in eight species that were historically fished and seven that were not. The same period brought largely cool ocean conditions, which support increased rockfish reproduction.

"This is the first research we know of to demonstrate that marine protected areas are producing high abundances of fish larvae that can seed surrounding areas," Thompson said. "That was an important part of the vision for these areas when they were established, and it's rewarding that management actions are contributing to the recovery of rockfish in Southern California." 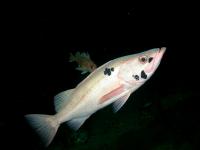