Tropical Cyclone Gita dropped a lot of rain as it strengthened into a major hurricane in the South Pacific Ocean. NASA's IMERG calculated totals based on satellite observations that revealed over a foot (305 mm) of rain had fallen in various areas.

Tropical Cyclone Gita recently battered and drenched first Samoa and then Tonga as it passed close to both island groups. Gita was a tropical storm with winds of about 40 knots (46 mph) when it passed to the south of Samoa but still caused widespread destruction and flooding. The president of the United States approved a disaster declaration for Samoa.

The tropical cyclone's winds had increased to about 125 knots (144 mph) when it battered Tonga as the equivalent of a category four hurricane on the Saffir-Simpson hurricane wind scale. Destructive winds were the main cause of destruction but heavy rains also drenched Tonga. Many structures were destroyed including Tonga's historic Parliament House.

This rainfall accumulation analysis was derived from NASA's Integrated Multi-satellitE Retrievals data (IMERG). IMERG data were used to calculate estimates of precipitation totals from a combination of space-borne passive microwave sensors, including the GMI microwave sensor on the GPM or Global Precipitation Measurement mission satellite, and geostationary IR (infrared) data. GPM is a joint mission between NASA and the Japan Aerospace Exploration Agency, JAXA.

On Feb. 14 at 0150 UTC (Feb. 13 at 8:40 p.m. EST) the MODIS instrument aboard NASA's Aqua satellite captured a visible image of Tropical Cyclone Gita south of the island of Fiji in the South Pacific Ocean. The image showed that Gita still maintained a large eye surrounded by powerful thunderstorms.

A tropical cyclone warning is in force for Fiji. For updated warnings, visit: http://www.met.gov.fj/.

Advance warnings have been posted for the southern parts of New Caledonia. That area will be affected by this system on Friday and Saturday (February 16 and 17) local time. Please monitor output from Meteo France (in French): http://www.meteo.nc/nouvelle-caledonie/cyclone/phenomenes-en-cours

In addition the North Island of New Zealand may be affected by Gita on February 19 and 20. Please monitor forecasts from Met New Zealand: http://www.meteo.nc/nouvelle-caledonie/cyclone/phenomenes-en-cours.

Today tropical cyclone Gita is traveling over the open waters of the South Pacific Ocean east of New Caledonia. Gita was still a powerful tropical cyclone with winds of about 115 knots (132 mph). The Joint Typhoon Warning Center (JTWC) predicts that Gita will weaken and re-curve toward the southeast in the next few days. This will put Gita on a course to affect the New Zealand area as a much weaker storm in about five days. The remnants of another tropical cyclone called Fehi already caused flooding and destruction in New Zealand in early February. 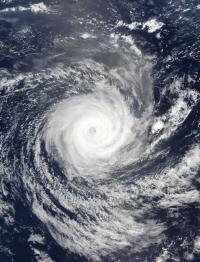 IMERG data on rainfall from Gita