Alongside the well-known hazards of space -- freezing temperatures, crushing pressures, isolation -- astronauts also face risks from radiation, which can cause illness or injure organs.

Though not believed to be an imminent threat to current missions, astronauts may one day face radiation from solar winds and galactic cosmic rays. How much radiation, what kind, and what the anticipated health impacts of this exposure would be to astronauts are open questions among space agencies.

Jeffery Chancellor, a research scientist in the Department of Physics and Astronomy at Texas A&M University and a PhD candidate in the applied physics program there, has spent more than a decade studying these questions as part of four NASA missions. Recently, collaborating with physician and astronaut Serena Aunon-Chancellor (NASA/University of Texas Medical Branch) and Associate Director of NASA's Human Research Program for Exploration Research Planning John Charles (NASA), Chancellor examined the health implications of space radiation exposure in low-altitude polar orbits.

The researchers used as a test case the Manned Orbiting Laboratory (MOL), about which mission documents were recently declassified.

"It was such a unique orbital profile," Chancellor said. "Polar, low altitude... I couldn't guestimate what the effects would be. So, I decided to take a step back and apply advanced computational and numerical methods to this mission profile."

They found that the relatively minimal shielding of the MOL program's space vehicle and its high inclination polar orbit would have left the crew susceptible to high exposures of cosmic radiation and solar particle events. Had the mission continued through 1972, astronauts would have faced toxic doses of radiation during a massive solar event.

Results were published in Aerospace Medicine and Human Performance in January 2018.

The study was supported by the Office of the Director of National Intelligence and made extensive use of supercomputers at the Texas Advanced Computing Center (TACC).

EYES IN THE SKIES

The Manned Orbiting Laboratory was conceived as an experimental laboratory for human spaceflight, but was recast as a secret reconnaissance platform in 1965 during the height of the Cold War. The vehicle would have travelled in low-earth orbit and passed repeatedly over the northern and southern polar regions to better spy on the Soviet Union. This type of orbit incurs greater radiation exposure than orbits closer to the equator because it is less protected by the Earth's gravitational field.

In August 1972 -- three years after the MOL mission planning was discontinued due to the emergence of cheaper, unmanned satellites -- the Earth experienced a historically large solar particle event. Chancellor wondered how typical radiation would have impacted MOL pilots who orbited for 30 days in the thin-shielded vessel and how a massive event like the one in 1972 would have affected someone caught in flight.

The researchers focused on radiation from two sources: solar winds and galactic cosmic rays. Some space radiation is believed to pass through the walls of shuttles, while some barrages the shielding and causes a cascade of loose metal ions. A portion passes through the body; the rest deposits its energy on the skin or even inside the body, affecting the organs.

Determining the radiation levels that MOL pilots would have experienced behind the vehicle's light-weight shielding entailed a good deal of data mining, extrapolation and simulation. Chancellor and his collaborators modeled the MOL's orbit profile, the space weather and geomagnetic forces from those years, and the particle and heavy ion transport that such a trajectory would have encountered.

Combining these factors, sampling them, and simulating them thousands of times on TACC's Lonestar5 supercomputer, Chancellor and his collaborators found that, under normal conditions, the MOL crew would have endured 113.6 millisievert (mSv; a measure of radiation dosage) to their skin and 41.6 mSv to blood forming organs (for instance, bone marrow or lymph nodes) during a 30-day flight -- well within the exposure limits for NASA astronauts.

However, during the "worst-case scenario" of the 1972 solar storm, their skin would have been exposed to 1,770 mSv, while their organs would have experienced 451 mSv, both of which exceed NASA exposure limits.

Based on animal studies, Chancellor and his colleagues anticipate that such exposure would have caused nausea, vomiting, fatigue, and possibly skin burns to crew. Without prompt instigation of medical countermeasures, the risks could have been even more severe.

"MOL missions in polar orbit would have had even fewer communication opportunities with ground controllers than NASA missions orbiting much closer to the equator -- and those were none too frequent - so any mission in flight at the time of that solar event would probably have been terminated immediately," said Charles, co-author of the study. "Whether that would have been soon enough to prevent such dire effects on the pilots is difficult to say."

Though the study explored the historical MOL missions, the researchers had in mind future commercial space flights, like those proposed by SpaceX or Virgin Galactic, that will likely travel a similar orbit to best show off the beauty of Earth from space.

"I think the research will have a huge impact for commercial space flight," Chancellor said. "It gives some insight to people who are trying to come up with ideas for orbiting hotels, or to SpaceX or Virgin Galactic who want to do tourist flights, in terms of what they have to address in order to protect the crew and customers."

Their methods for accurately predicting space radiation exposure and impacts are also relevant for travel to the Moon or other planets.

Efforts to simulate space radiation risk are not new. In fact, historical records show they were a part of NASA and Department of Defense space research from the beginning. But decades of study have achieved few concrete answers or practical measures to mitigate radiation, according to the scientists.

"Despite years of research, understanding of the space radiation environment, and the risk it poses to long-duration astronauts remains limited," Chancellor and his team wrote in a paper that appeared in Nature Microgravity in April 2018. "Given the intended future of human spaceflight, with efforts now to rapidly expand capabilities for human missions to the moon and Mars, there is a pressing need to improve upon the understanding of the space radiation risk, predict likely clinical outcomes of interplanetary radiation exposure, and develop appropriate and effective mitigation strategies for future missions."

Chancellor says that until recently scientists did not have the capabilities to do radiation simulations accurately.

"We were making assumptions and approaching the problem in the best possible way based on what we had available," he said. "But this is an area where better algorithms and more powerful computers make a big difference in what's possible. I don't think we would've made this progress or understood what we're seeing without the ability to use high-performance multicore computers. It's a game-changer."

Each of the three test cases from the Manned Orbital Laboratory that the team ran on Lonestar5 required 150,000 computational hours and generated 2.5 terabytes of data.

"Tracing 10^11 or 10^15 particles in terms of every interaction at every micron or smaller involves a humongous computational load. The fact that I could parallelize the problem and have 1,000 processors running each computation and do that in three to four hours instead of three to four months is a huge benefit," he said. "The more samples you take, the more accurate the results and the more confidence you have."

Not only that: the speed-up may one day enable improved decision-making for those working in mission control.

Chancellor used Lonestar5 for most of his computations, but when he re-ran some of his computations on Stampede2, TACC's latest supercomputer and one of fastest in the world, he was able to obtain a result in five minutes as opposed to five hours.

"It's smoking fast," Chancellor said. "When I first started getting results off of Stampede, I called my friend who works in mission control for radiation at NASA and said, 'You guys have to get on this.'"

This rapid turnaround could enable NASA to run much more accurate models than they currently do to determine, in real-time, how a solar storm or other cosmic event might impact astronauts -- a capability that may one day save lives.

The research was supported in part by the Office of the Director of National Intelligence (ODNI), Intelligence Advanced Research Projects Activity (IARPA), via Interagency Umbrella Agreement IA1-1198. National Science Foundation.

Anticipating the dangers of space 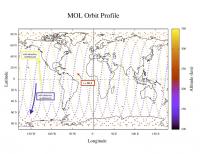