The world’s fastest-growing mud volcano is collapsing and could subside to depths of more than 140 metres with consequences for the surrounding environment, according to new research.

As the second anniversary (May 29) of the eruption on the Indonesian island of Java approaches, scientists have also found that the centre of the volcano – named Lusi – is collapsing by up to three metres overnight.

Such sudden collapses could be the beginning of a caldera - a large basin-shaped volcanic depression - according to the research team, from Durham University UK, and the Institute of Technology Bandung, in Indonesia.

Their findings, based on Global Positioning System (GPS) and satellite measurements, are due to be published in the journal Environmental Geology.

Lusi first erupted on May 29, 2006, in the Porong sub-district of Sidoarjo, close to Indonesia’s second city of Surabaya, East Java, and now covers seven square kilometres and is 20 metres thick.

In January 2007 Durham University published the first scientific report into the causes and impact of Lusi, revealing that the eruption was almost certainly manmade and caused by the drilling of a nearby exploratory borehole(1) looking for gas.

Fourteen people have been killed and 30,000 people have been evacuated from the area. More than 10,000 homes have been destroyed while schools, offices and factories have also been wiped out and a major impact on the wider marine and coastal environment is expected.

The researchers say the subsidence data could help determine how much of the local area will be affected by Lusi.

Their research used GPS and satellite data recorded between June 2006 and September 2007 that showed the area affected by Lusi had subsided by between 0.5 metres and 14.5 metres per year.

The scientists found that if Lusi continued to erupt for three to 10 years at the constant rates measured during 2007 then the central part of the volcano could subside by between 44 metres and 146 metres – 26 metres longer than a football pitch.

They propose the subsidence is due to the weight of mud and collapse of rock strata due to the excavation of mud from beneath the surface.

Their study has also found that while some parts of Sidoarjo are subsiding others are rising suggesting that the Watukosek fault system has been reactivated due to the eruption.

Co-author Professor Richard Davies, of Durham University’s Centre for Research into Earth Energy Systems (CeREES), said: “In the two years since she first erupted Lusi has continued to grow. Our research is fundamental if we are to understand the long-term effects of the mud volcano on the local and wider environment and population.

“Sidoarjo is a populated region and is collapsing as a result of the birth and growth of Lusi. This could continue to have a significant environmental impact on the surrounding area for years to come.

“If we establish how long the volcano will continue to erupt for then the subsidence data will allow us to assess the area that will ultimately be affected by this disaster. This could have implications for future plans aimed at minimising the volcano’s overall impact.”

(1)The borehole is owned by Indonesian oil and gas company Lapindo Brantas. For more information about the January 2007 Durham University study go to: http://www.dur.ac.uk/news/newsitem/?itemno=5090&rehref=%2Fnews%2Farchive%2F&resubj=%20Headlines

Professor Richard Davies, of Durham University’s Centre for Research into Earth Energy Systems (CeREES) is available for interview on:

Lusi 1: The main vent of the Lusi mud volcano taken within a few months of eruption.

Lusi 3: Flooded railway on the western side of Lusi.

Lusi 4: Satellite image of the Lusi mud volcano (please credit:: Ikonos Satellite Image, copyright CRISP NUS 2007/2008). The white plume in the centre of the picture is steam from the central vent of the volcano.

For a copy of the paper please contact Durham University Media Relations Office on +44 (0)191 334 6075; email media.relations@durham.ac.uk.

Mud volcanoes are extrusions of a water and mud mix on the earth’s surface that form cone-shaped volcanoes. These can be metres to kilometers wide and metres to hundreds of metres thick. They commonly occur in convergent tectonic settings, such as Azerbaijan, in front of deltas, such as the Mississippi and due to the gravitational collapse of continental margin sediments such as the Niger Delta. 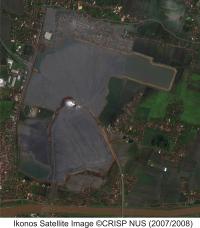