Nearly 40 years ago, analog data tapes faithfully recorded intense seismic activity in the two months before the historic eruption of Mount St. Helens in Washington State in May 1980. It took some lengthy and careful restoration efforts--including a turn in a kitchen oven for some of the tapes--to recover their data.

The data provide a near-continuous sequence of seismic activity leading up to the 18 May eruption, but they do not appear to contain any significant change in the seismic signals that would have hinted to researchers "that something big was coming," said Stephen Malone, an emeritus professor at the University of Washington and the former director of the Pacific Northwest Seismic Network.

In Seismological Research Letters, Malone describes how he worked from 2005 to 2014 to laboriously recover the data from the tapes into a digital form. His paper is part of the journal's focus section on the challenges, successes and analyses of historical seismograms.

The Mount St. Helens tapes "are a unique data set for the time, in that there aren't very many cases where you have a volcanic earthquake sequence, certainly not one that was as wild and crazy and active as St. Helens, for which you have data other than on paper records," Malone said.

Digitally transformed, the tape data have been archived at the Incorporated Research Institutions for Seismology (IRIS) Data Management Center. Malone said few researchers have accessed them so far.

The quality of the data is less impressive than today's digital recordings, he noted, but combined with modern software and techniques, they could give researchers new insights into volcanic systems, and potentially into the May 1980 eruption.

Even though the initial analysis of the tapes did not reveal anything that would have suggested an imminent major eruption, Malone said, "if someone did a systematic look at these data using much more modern analysis tools, they might see a gradual change or something that did progress in a subtle way."

The tapes come from seismic stations installed by the Pacific Northwest Seismic Network after a March 1980 magnitude 4.2 earthquake near the volcano. Every five days, the tapes at the stations had to be serviced by hand. Some of the stations used radio telemetry to transfer their data to a digital recording system at the PNSN labs, but the system was designed so that only the largest earthquakes triggered recordings for later analysis.

Malone recalls the frantic activity at the lab at the time, where he and his colleagues were attempting to keep up with the incoming seismic data "but also interpreting it in real time for the benefit of the volcano hazards people," he said. "We kept on top of things the best we could, but retaining data for longevity was a lower priority then."

The five-day tapes, along with larger tapes that held some of the telemetered data and were changed irregularly at the lab, were forgotten in storage until Malone's retirement in 2007. He worked with them off and on for years to see what data might still be recovered.

Techniques from the audio recording industry helped Malone figure out how to proceed. For instance, he learned that baking the tapes could help stabilize them so that they could be spun and read. "If you bake the tapes, actually cook them at low temperatures for a day, it sets the binder oxide on the tape such that it won't be scraped off as easily." Malone and his wife experimented with this technique using a home oven, "and we were able to recover data with pretty good fidelity," he said.

For the larger tapes, Malone turned to a Canadian audio recording professional who had some experience with analog seismic data tapes used by oil and gas companies, and who had the equipment to spin the tape reels. The recovery was paid with the help of a U.S. Geological Survey grant that provides funds to recover old seismic data.

Malone said the recovery "was a little like gambling. I didn't know how good the data would be until we had processed the whole tape. But I've been modestly pleased by the results."

All of the analog tapes were discarded after Malone determined that no more data could be recovered from them. 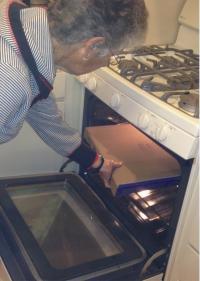