PULLMAN, Wash. - When java giants like Starbucks seek out the finest fair trade coffee beans in Guatemala, insects can make all the difference.

Tucked away in the M.T. James Entomological Museum at Washington State University, more than 130,000 colorful moths, beetles and other bugs are preserving a slice of Guatemalan biodiversity essential to the country's health and economy.

Small Guatemalan coffee farms planted on eroded, clear-cut land use the insect collection as a reference to help rebuild native habitat and attract buyers from specialty companies like Starbucks.

By planting trees that draw specific insects, the farms attract birds, reptiles, bats and other mammals to create the biodiversity required for sale to fair trade organizations. In the process, farmers can nearly double their paychecks.

Museum proprietor and entomology professor Richard Zack has been collecting the arthropods for eight years in an effort to identify a rapidly disappearing swath of insect species.

Threatened by deforestation and loss of habitat, thousands of mostly nameless six-legged creatures are going extinct. Unlike Costa Rica whose insect population has been well documented, Zack said Guatemala's is a virtual wilderness.

"Although Central America is one of the most biodiverse areas of the world, Guatemalan insects haven't been heavily collected due to civil unrest in the country," he said. "It's also a land of tremendous habitat variation, ranging from coastal lowlands to temperate regions to highland volcanoes, which adds to the difficulty."

That rugged terrain also produces some of the world's most coveted coffee beans. High altitudes, consistent rainfall and more than 300 microclimates add to the rich, sweet flavors Guatemalan coffees are known for.

Zack and adjunct professor Peter Landolt initially traveled to Guatemala in 2005 in search of yellow jackets, a type of wasp. As their research interests evolved, the entomologists found themselves playing an important role in the nation's fight to save its environmental homeland.

Working with scientists at the Universidad del Valle de Guatemala, Zack and Landolt learned that the region's natural habitat was being destroyed at a disastrous rate.

Much of the loss was due to the slash and burn methods used by poor villagers returning to the land after years of civil war. Cleared acreage made way for corn, sorghum or cattle; but some, hoping for a more lucrative income, replanted the deforested areas with coffee plantations.

The researchers told Zack, "If you want to do insect biodiversity studies, you'd better get in there now before they all disappear!"

Heeding their words, Zack and Landolt focused their collecting efforts on the remaining patches of "virgin" jungle scattered throughout the country. Using light traps and bug nets, they scooped up every unique insect they could find.

The result was around 900 species of moths; yellow jackets; great quantities of aquatic insects; cicadas; the gigantic, horned Golofa beetle; brown jewel beetles prized by collectors in Japan and Europe; and more. They also gathered masses of tiny nondescript "bugs."

The neatly pinned collection is now housed in the WSU museum and available for study by researchers worldwide.

Zack said each insect plays a vital role in its environment and no one knows what harm could result from its elimination.

"The value of a big beetle is no more or less than that of the smallest fly in the mud," he said. "We're concentrating on the microscopic species as most of the big stuff has already been identified."

Over time, word of Zack and Landolt's insect study spread throughout Guatemala and caught the attention of new coffee plantation owners.

To counter their country's inevitable loss of jungle, government officials were urging the farmers to retain biological diversity wherever possible. This included planting tall shade trees over the coffee bushes to form coffee forests. It also led to creation of private nature reserves, parks and biological corridors – all meant to protect the soil, water and air plus ensure the survival of a wide variety of species.

And it meant a big boost to Guatemala's economy through ecotourism.

Coffee farms that can document their biodiversity now market themselves as green travel destinations. Tourists eager to see rainforests, watch birds and observe coffee processing are willing to pay top dollar to visit the plantations.

Biodiversity also sells coffee. Fair trade specialty companies like Doma, Equal Exchange and Starbucks pay a much higher price for coffee beans than do supermarket brands. To be eligible, farmers must comply with sustainability standards as well as follow equitable labor practices.

Zack's collection of beetles and flies suddenly became an attractive means to accomplish that goal. Aided by a local guide, the WSU entomology team began fielding requests for help from coffee plantations and national parks eager to develop the biodiversity needed to attract both ecotourists and fair trade coffee buyers.

"Insects are the basis of the food chain," said Zack. "Growers use the information we provide to plant trees that attract those insects, which brings in birds, reptiles and certain mammals like bats. The goal is to maintain the ecosystem as close to natural as possible.

"Everyone gains from this," he added. "Starbucks wants to buy from ecofriendly, fair trade growers. The growers want to be able to sell coffee under the regulations Starbucks sets up. And we get to document and publish our findings on insect biodiversity so people around the world can use the information."

Zack and Landolt will continue their research in Guatemala with a winter insect hunt set for early 2015.

Beetles and a cup of joe 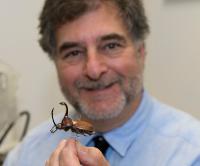