A forest's ability to store carbon depends significantly on the bedrock beneath, according to Penn State researchers who studied forest productivity, composition and associated physical characteristics of rocks in the Appalachian ridge and Valley Region of Pennsylvania.

The results have implications for forest management, researchers suggest, because forests growing on shale bedrock store 25% more live, aboveground carbon and grow faster, taking up about 55% more carbon each year than forests growing on sandstone bedrock.

The findings demonstrate that forests underlain by shale in this region provide more ecosystem services such as carbon uptake and biodiversity, explained researcher Margot Kaye, associate professor of forest ecology in the College of Agricultural Sciences. Also, shale forests make up a smaller portion of the landscape and should be high-priority candidates for management or conservation.

"As forests grow and respond to warming, shifts in precipitation and invasive species, managers will benefit from incorporating lithological influences and considerations on forest composition and productivity," she said. "For example, conserving forests growing on shale with higher species diversity will likely lead to forests that are resilient to stressors and can grow more vigorously."

To reach their conclusions, researchers analyzed forest inventory data from 565 plots on state forest and game lands managed by the Pennsylvania Department of Conservation and Natural Resources and the state Game Commission in the Appalachian Ridge and Valley Region. They used a suite of GIS-derived landscape metrics, including measures of climate, topography and soil physical properties, to identify drivers of live forest carbon dynamics in relation to bedrock.

Those forest plots contained more than 23,000 trees, ranging from 20 to 200 years old, with most being 81 to 120 years old, according to the most recent available forest inventory data. In the study dataset, 381 plots were on sandstone bedrock and 184 were on shale -- a similar ratio to the amount of Pennsylvania public land on each bedrock type in the Ridge and Valley Region. There are 812,964 acres of forest on sandstone and 262,025 acres of forest on shale in the region.

"That is an eye-opening number," said lead researcher Warren Reed, a doctoral student in ecology.

While forests underlain by both shale and sandstone bedrock were oak dominated, the tree communities are quite different, Reed pointed out. Northern red oak is more dominant on shale bedrock, and chestnut oak dominates on sandstone. Most species in the forest tend to be more productive on shale, and the diversity of tree species is higher in sites on shale bedrock.

Forests grow faster over shale bedrock than sandstone bedrock because of soil characteristics that generally make water more available to trees, Reed hypothesized. Over millions of years, bedrock breaks down, becomes parent material and soils develop. Because of the composition of the rock types, shales break down into soils with finer texture than sandstone, which is coarser.

Forests above shale bedrock growing in finer soils typically have better access to water during the growing season.

"We see this across the landscape, so forest productivity is indirectly related to bedrock," Reed said. "Oaks growing on sandstone are more sensitive to annual climate and water availability -- or put differently, oak growth on sandstone is more limited by water than on shale."

The findings of the research, recently published in Forest Ecology and Management, are exciting, Reed noted, because the information about underlying bedrock type has been readily available but previously not used to understand forest growth. Maps showing the locations of bedrock types have existed for decades. But the magnitude of the forest differences due to bedrock is quite surprising, he said.

The concept of geologic influences on forest growth will be especially valuable in Pennsylvania, Reed said, because it is a major producer of hardwood lumber, and the state has so much forest growing on its portion of the Appalachian Ridge and Valley Region. The Ridge and Valley is a major portion of the forested Appalachian Mountains, so these rules should apply from southern New York to northern Georgia within that landscape.

"Sequestering carbon in forests is one of the many nature-based solutions we have to combat global climate change," he said. "I believe this is an ecosystem service that will continue to gain traction and eventually greater market value."

The National Science Foundation and the U.S. Department of Agriculture's National Institute of Food and Agriculture supported this research. 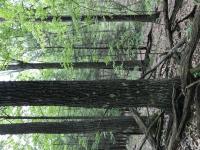 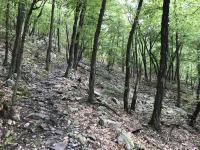