PITTSBURGH—Beekeepers and researchers nationally are reporting growing evidence that a powerful new class of pesticides may be killing off bumblebees. Now, research at the University of Pittsburgh points toward another potential cause: metal pollution from aluminum and nickel.

Published in the journal Environmental Pollution, the Pitt study finds that bumblebees are at risk of ingesting toxic amounts of metals like aluminum and nickel found in flowers growing in soil that has been contaminated by exhaust from vehicles, industrial machinery, and farming equipment. The Pitt study finds that bumblebees have the ability to taste—and later ignore—certain metals such as nickel, but can do so only after they visit a contaminated flower. Therefore, the insects are exposed to toxins before they even sense the presence of metals.

"Although many metals are required by living organisms in small amounts, they can be toxic to both plants and animals when found in moderate to high concentrations," said Tia-Lynn Ashman, principal investigator of the study and professor and associate chair in Pitt's Department of Biological Sciences in the Kenneth P. Dietrich School of Arts and Sciences. "Beyond leading to mortality, these metals can interfere with insect taste perception, agility, and working memory—all necessary attributes for busy bumblebee workers."

Ashman and George Meindl, coauthor of the study and a PhD candidate in Ashman's lab, studied bumblebee behavior using the Impatiens capensis, a North American flower that blooms in summer. Its flowers are large, producing a high volume of sugar-rich nectar each day—an ideal place for bumblebees to forage. The blooms were collected from the field each morning of the two-week study and were of a similar age, color, and size.

To determine whether nickel and aluminum in the flowers' nectar influenced bumblebee behavior, Ashman and Meindl used two groups of uncontaminated flowers, one group of flowers contaminated by nickel, and another contaminated by aluminum. When a bumblebee visited a flower in an array, the entire visitation was recorded as well as the time spent (in seconds) foraging on each individual flower. This included monitoring whether the bee moved from a contaminated to a noncontaminated flower, whether the bee moved to the same group it had just sampled, or whether the bee left the flower group without visiting other individual blooms. Following each observed visit, all flowers in the array were replaced with new flowers, to ensure accurate results.

"We found that the bees still visited those flowers contaminated by metal, indicating that they can't detect metal from afar," said Ashman. "However, once bumblebees arrive at flowers and sample the nectar, they are able to discriminate against certain metals."

"It's unclear why the bees didn't sense the aluminum," said Meindl. "However, past studies show that the concentrations of aluminum found throughout blooms tend to be higher than concentrations of nickel. This suggests that the bees may be more tolerant or immune to its presence."

These results also have implications for environmentally friendly efforts to decontaminate soil, in particular a method called phytoremediation—a promising approach that involves growing metal-accumulating plants on polluted soil to remove such contaminates. Ashman says this approach should be considered with caution because the bees observed in the study foraged on metal-rich flowers. She states that further research is needed to identify plants that are ecologically safe and won't pose threats to local animals that pollinate.

The paper, "The effects of aluminum and nickel in nectar on the foraging behavior of bumblebees" first appeared online March 6 in Environmental Pollution. Funding was provided by the Carnegie Museum of Natural History's Powdermill Nature Reserve in Rector, Pa., a Botany-In-Action Fellowship from the Phipps Botanical Garden and Conservatory in Pittsburgh, an Ivey McManus Predoctoral Fellowship to Meindl, and a National Science Foundation grant (DEB 1020523) to Ashman. The bees were observed at a nature reserve in Western Pennsylvania during August and September 2012. 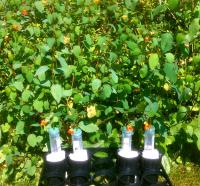