Toronto - Canada is stunting its own economy and blocking businesses from reaping the benefits of innovation by clinging to protectionist policies that curb foreign investment, a new study from the University of Toronto's Rotman School of Management says.

Relaxing restrictions to bring Canada more in line with other democratic market economies would significantly boost productivity, it says. Put into hard numbers, that adds up to an extra 137,400 jobs or $9.6 billion in annual earnings -- $648 per worker.

"Canada is far more restrictive than what most people would believe," says Walid Hejazi, an associate professor of economic analysis and policy who co-authored the study with fellow Rotman professor Daniel Trefler, the Douglas and Ruth Grant Canada Research Chair in Competitiveness and Prosperity.

"Our protectionist policies are inhibiting innovation and productivity in the Canadian economy. As a result, Canada is losing its position globally on several metrics," adds Prof. Trefler.

Foreign investment restrictions are typically defended by concerns that domestic industry will be swamped or swallowed up and jobs lost in the face of wide-open foreign competition. But the evidence, says the study, shows foreign investment and competition ultimately lead to higher domestic productivity by introducing and encouraging industries to adopt more efficient and innovative practices.

The study used measures of foreign investment restrictiveness for member countries published by the Organization for Economic Cooperation and Development in 2010.

Focusing on three key business service sectors - financial, telecommunications and air transportation services - the study found that Canada's measure was above the OECD average and the highest in the G7, except for Japan.

Given that those three sectors impact many "downstream" businesses that rely on them to run and grow their own enterprises, such a high level of protectionism poses a serious cramp on productivity throughout the economy, the study points out.

Bringing Canada in line with the OECD average would raise labour productivity by 0.79 percent economy-wide. While that may not sound like much, it's significant in economic terms.

"These are big numbers, from a policy perspective," says Prof. Hejazi. "We anticipated that the numbers would be large, but not this large."

A key contributor to Canada's higher-than-average bar for foreign investment is a review mechanism, in which all foreign investment proposals above a certain threshold are automatically subject to assessment by the Canadian government for their potential net benefit to the country.

The paper was published in the Journal of International Business Policy. 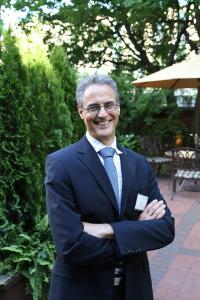