Big and strong cyclones can harm coral reefs as far as 1000 kilometres away from their paths, new research shows.

A study led by Dr Marji Puotinen from the Australian Institute of Marine Science (AIMS) sounds a warning about the way strong cyclone winds build extreme seas that affect coral reefs in Australia and around the world.

Conventional modelling used to predict how a cyclone, hurricane or typhoon might impact corals assumes that wave damage occurs primarily within 100 kilometres of its track.

To test this, Dr Puotinen and colleagues looked at Scott Reef, a well-studied atoll reef structure off the northwest of Western Australia, and how it fared as a result of Cyclone Lua - a slow-moving weather event that developed off the coast in 2012.

Although the area of the cyclone producing the most intense winds came no closer than 500 kilometres to the reef, the high seas it whipped up battered it with waves four to 20 metres high for three and a half days.

The researchers found that at its most exposed sections, Scott Reef lost 50 per cent of its massive and robust Porites corals and virtually all its more fragile branching Acropora coral species. Similar damage was found on another reef, a further 300 kilometres distant, and models predicted damaging waves could be felt up to 1000 kilometres away.

"This example demonstrates that if we assume damage from all cyclones occurs within a 100 kilometre radius of a cyclone's track, we will underestimate the spatial extent for big, strong cyclones by up to 10 times," Dr Puotinen said.

"This could lead to making unfortunate choices when trying to prioritise conservation targets."

She added that estimates of wave damage from cyclones involve highly complex calculations because they change constantly, varying in strength, size and speed over time. The largest waves occur from storms that move slowly, and have the highest winds spread over the largest area.

To test the consequences of using the standard distance-based model, she and colleagues - from the AIMS node in Perth, the University of Western Australia and the Indian Ocean Marine Research Centre - collected existing information on cyclone size and frequency, crunching data gathered between 1985 and 2015 for 150 coral reef ecoregions around the world.

Position and strength and size for each cyclone was recorded every six hours, allowing variations to be plotted in detail.

They found that more than 70 per cent of the ecoregions had experienced at least one impact by a cyclone at peak strength and size during the 30-year period. Some, however, experienced them roughly every five years, and others roughly every 10.

"Coral reefs have been living with cyclones for millions of years," said Dr Puotinen. "But recovery after a big battering is a slow process, which can take a decade or more. This means that many coral reefs around the world will not have time to fully regrow before the next cyclone hits."

Climate change models present a complex picture for cyclones. The total number occurring in any given period may well not increase - but that's not necessarily good news for vulnerable reefs.

"Changes in the atmosphere mean it will be harder for cyclones to form in the first place, but warmer ocean water, which fuels their intensity, means it will be easier for them to strengthen once they do," Dr Puotinen explained.

She added that her team's findings carry lessons for reef management and conservation strategies.

"When deciding where on the Great Barrier Reef, for instance, to invest millions of dollars to repair or enhance reefs, you don't want to select a location likely to be regularly battered by cyclone waves," she said.

"Our research should make it easier for reef managers to choose between candidate reefs."

Dr James Gilmour, also from AIMS, a co-author on the paper, said the findings illustrated the complexity and severity of the threats facing reefs around the world.

"Coral reef communities around the world are under increasing threat from a range of stressors, and we must understand which parts of the reef should be the focus of conservation efforts," he said.

"In particular, it is the combination of cyclones with exposure to rising water temperatures that is the most significant emerging threat to reefs globally."

Unravelling the specific effects of cyclones, the researchers conclude, will provide vital clues for the management of at-risk areas.

The research is published in the journal Global Change Biology.

Cyclones can damage even distant reefs 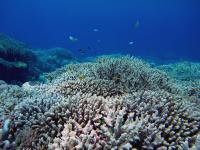 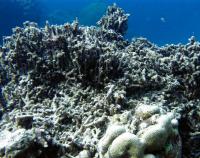