Sometimes, it's really easy for scientists to tell species of animals apart--they'll be obviously different shapes or colors. Other times, different species will look nearly identical to the naked eye. In those cases, scientists need to turn to techniques like DNA analysis to tell them apart. Or, like researchers at the Field Museum discovered when studying some near-identical millipedes, you can sometimes just shine a blacklight on them, and under the ultraviolet light, parts of the different species' genitals will glow different colors.

"This paper is reviewing and mopping up and synthesizing what we know about these species of North American millipedes," says Petra Sierwald, an associate curator at the Field and the lead author of a paper describing the findings in the Zoological Journal of the Linnean Society, along with co-authors at the Field, Virginia Polytechnic Institute, and the University of California, Davis.

Millipedes are arthropods, relatives of centipedes and distant cousins of spiders and insects. They have a lot of legs, but nowhere near the "thousand" implied by their name--the ones in this paper, in the genus Pseudopolydesmus, have around 70. "Arachnids like spiders are all predators, but millipedes are mulch-munchers, they're in waste management," explains Sierwald. The species in this study are found all over the eastern United States, from Canada for Florida, where they live in dead leaves on the forest floor, but they're not very flashy-looking: they're half an inch long, and their exoskeletons are brown. Their genitals, though, are a little more special.

Male millipedes' sperm comes out from an opening behind their second pair of legs. Their seventh pair of legs are called gonopods, and they're specially adapted for transferring sperm to a female millipede's vulvae, which are behind her second pair of legs. "We think, he dips his gonopods into his ejaculate, which is kind of a blue-ish liquid, and then he goes in search of a female, walking around with his sperm on his gonopods," explains Sierwald. "The males' gonopods have all these special features, little knobs and things. Some of them look like the bristles on a toothbrush." And the differences between the different gonopods are even more vivid under UV light.

The idea to look at the millipedes under UV light came from previous studies showing that other arthropods glow under similar conditions. When the animals are exposed to UV light, the energy from the light interacts with special proteins in the animals' exoskeletons, causing them to emit light in a process called fluorescence. "We discovered that a lot of the millipedes' genital parts fluoresce under UV light, so we developed an imaging method to capture it," says Sierwald.

Taking a picture of glowing millipede genitals is easier said than done. "These millipedes are really small, and their genitalia are even smaller," says Sierwald. One way to get images of tiny specimens is to use a scanning electron microscope, but that wasn't ideal in this case--that technique involves coating the specimen in a thin layer of gold so that electrons bounce off of it, and then a detector puts together a picture showing where the electrons were deflected. Since many of the millipede specimens used in this research were very old (the oldest was collected in 1887) and scientifically valuable, the researchers had to find a new way to study the specimens without damaging them. Instead, Sierwald's co-author, Stephanie Ware, a research assistant at the Field Museum, developed a new way to take detailed pictures of very tiny things.

"We have a camera on a motorized lift that allows us to move the camera towards the specimen in tiny, tiny amounts. With every movement, a different part of the specimen comes into focus while most of the rest of it is out of focus and a picture is taken, " says Ware. "At the end, we have anywhere from 10 to 70 pictures and we use special software that picks out what is in focus in every picture and stitches it all together into one image where the entire specimen is in focus. You get highly detailed images and you don't have to damage the specimens at all."

Ware photographed the millipedes' gonopods under UV light, and in the resulting images, it's much easier to see details. Some species' genitals glowed in different colors; in others, the UV lighting made differently-shaped parts stand out more.

It's not clear why the millipedes have evolved glowing genitalia--as far as we can tell, they can't really see the glow. "Millipedes don't see well at all, they don't see images. I don't know if they see any color," says Sierwald. "I think the fluorescence is an artifact or byproduct of the cuticle, the covering of the gonopod. Maybe it makes the cuticle stronger, but that is something we don't really understand."

But while reason behind the glowing gonopods remains a mystery, scientists are already able to use them to tell species apart. Analyzing Ware's photographs, Sierwald and her colleagues were able to sort the specimens into eight separate species--four fewer than scientists had previously recognized. "In some ways, it's the opposite of describing a new species--we were able to put some back together that shouldn't have been separated," says Sierwald.

Being able to properly tell species apart--even species of animals as unassuming as millipedes--is important for scientists. "One of the benefits of millipede research is we can use them as environmental indicators," explains Sierwald. "By collecting them and seeing where the different species are distributed over time, we can learn about climate and environmental change. And millipedes are important to their ecosystems--they're decomposers that release nutrients trapped in rotting leaf litter back to the soil."

And beyond these applications, says Sierwald, "We do this research because it tells us something about how the world works." 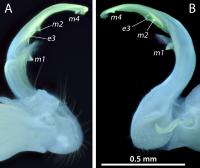 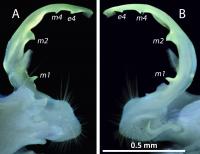