With the aid of computerized image analysis, it may be possible in the future for radiologists to feel images with the help of a three-dimensional mouse. Erik Vidholm at Uppsala University has been involved in developing the new technology, which makes it easier to diagnose and plan the treatment of cancer, for instance.

Computerized image analysis can be used to determine the size of organs like the liver, or to construct three-dimensional models of organs when surgery or radiation is being planned. The quality of these images often varies, however - what’s more we humans can actually look very different from each other inside, which makes it difficult for the computer to find the information that is relevant fully automatically. It’s therefore common to use interactive methods in which doctors themselves mark the areas of interest in the image and then let the computer do the rest of the work based on this information.

Erik Vidholm, at the Center for Image Analysis at Uppsala University, has taken part in the development of such interactive methods where the mouse and keyboard are replaced by a pen-like three-dimensional mouse that enables the user to feel the virtual organs. This is called haptics. Computer models are adapted to the images of organs and can then be used to measure the volume of the organ, for example, or to calculate changes in shape and migrations.

“To get a greater sense of depth in the image we use stereo graphics. When the models are to be adapted to the images, this is done partly automatically on the basis of the content of the image and partly with the input of the user wielding the haptic pen,” he explains.

Erik Vidholm has also developed a method for rapidly visualizing complex image volumes with the aid of modern graphics cards. This technology has been used as a component in the development of a method for more readily discovering breast cancer.

Most of these methods have been assembled in a software package that can be freely downloaded via the Internet so that other researchers in medical image analysis can benefit from them. The package is available at: http://www.cb.uu.se/research/haptics

Erik Vidholm’s dissertation will be publicly defended at Uppsala University on February 8. 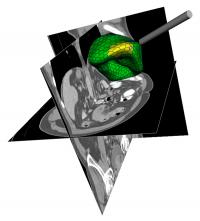