Some countries have already made the link to a limited extent and are glimpsing benefits in terms of jobs, livelihoods and economic returns that outstrip those wedded to older economic models of the previous century.

The new report, prepared by The Economics of Ecosystems and Biodiversity (TEEB) initiative hosted by the UN Environment Programme, calls on policy-makers to accelerate, scale-up and embed investments in the management and restoration of ecosystems.

It also calls for more sophisticated cost benefit analysis before policy decisions are made. The report cites a study on mangroves in south Thailand on the conversion of mangroves into shrimp farms.

Subsidized commercial shrimp farms can generate returns of around $1,220 per hectare by clearing mangrove forests. But this does not take into account the losses to local communities totaling over $12,000 a hectare linked with wood and non-wood forest products, fisheries and coastal protection services (Barbier 2007).

Nor does the profit to the commercial operators take into account the costs of rehabilitating the abandoned sites after five years of exploitation—estimated at over $9,000 a hectare.

The report outlines a ten-point plan aimed at catalyzing a transition to more ecosystem savvy economies able to meet the multiple challenges and deliver the multiple opportunities on a planet of six billion people, rising to nine billion by 2050.

Speaking at a press conference in Brussels on Friday 13 November, Pavan Sukhdev, TEEB's Study Leader, said: "Nature's multiple and complex values have direct economic impacts on human well being and public and private spending. Recognizing and rewarding the value delivered to society by the natural environment must become a policy priority.

The economic invisibility of ecosystems and biodiversity is increased by our dominant economic model, which is consumption-led, production-driven, and GDP-measured. This model is in need of significant reform. The multiple crises we are experiencing – fuel, food, finance, and the economy – serve as reminders of the need for change.

It is now up to governments to provide fiscal or other incentives to move us from short-term opportunism to long term stewardship. The right policies can help us move toward a resource efficient economy."

The report comes in advance of the UN climate convention meeting in Copenhagen where governments are expected to give the green light to funding developing countries to maintain forests.

Close to 20 per cent of current global greenhouse gas emissions are linked with deforestation. Reduced Emissions from Deforestation and Forest Degradation (REDD) aims to counter this while also generating financial flows from North to South.

REDD and REDD+, which includes not only maintaining forests but planting and recovering forest systems, secured the backing of close 15 presidents and prime ministers at a special meeting hosted last month by UN Secretary-General Ban Ki-moon.

"It could open the door to more creative and forward looking funds and mechanisms covering other nature-based infrastructure such as peatlands and wetlands en route to support for the services generated by coastal and marine ecosystems such as coral reefs to mangroves," he said.

The report has a number of key recommendations for policy makers to consider:

Over 100 experts from science, economics and policy from across the globe have been involved in the research, analysis and writing of the TEEB for Policy Makers report, which has been co-ordinated by Patrick ten Brink of the Institute of European Environmental Policy in Brussels.

TEEB is an independent study, lead by Pavan Sukhdev, hosted by United Nations Environment Programme with financial support from the European Commission; Germany, UK and the Netherlands, and recently joined by Norway and Sweden.

TEEB for policy makers is one of a series of five interconnected reports. These include the Report on Ecological and Economic Foundations (parts of which were published online in September 2009) and targeted end-user outputs for local and regional administrators, business and citizens. These will be released in the coming months until the final TEEB synthesis report in October 2010. Work is also taking place to analyze a large number of economic values for the main types of ecosystem services around the world and these findings will also be available in 2010. Further information is at www.teebweb.org.

The Economics of Ecosystems and Biodiversity study (TEEB) was launched by Germany and the European Commission in response to a proposal by the G8+5 Environment Ministers (Potsdam, Germany 2007) to develop a global study on the economics of biodiversity loss. TEEB is an independent study, lead by Pavan Sukhdev, hosted by United Nations Environment Programme with financial support from the European Commission, Germany, UK and Netherlands and recently joined by Norway and Sweden.

The study aims to draw together experience, knowledge and expertise from all regions of the world in the fields of science, economics and policy to enable practical actions in response to the growing evidence on the impact of the loss of biodiversity moving forward.

The Institute for European Environmental Policy (IEEP) is a leading centre for the analysis and development of environmental and related policies in Europe. www.ieep.eu

Scientific co-ordination for the TEEB study is undertaken by the Helmholtz Centre for Environmental Research (UFZ) in Leipzig. www.ufz.de

The term green carbon refers to carbon stored in terrestrial ecosystems e.g. plant biomass, soils, wetlands and pasture and increasingly recognised as a key item for negotiation in the UNFCC (in relation to forest carbon and mechanisms such as REDD, REDD-Plus). 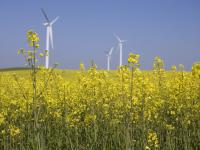 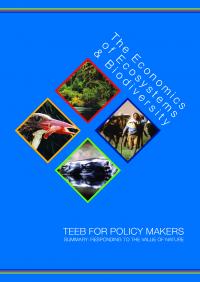