The environment significantly influences whether or not a certain bacterium will block mosquitoes from transmitting malaria, according to researchers at Penn State. "Bacteria in the genus Wolbachia represent a promising new tool for controlling malaria due to their demonstrated ability to block the development of the pathogen within Anopheles mosquitoes -- the mosquitoes that are responsible for the transmission of malaria parasites in many parts of the world," said Courtney Murdock, postdoctoral researcher, Center for Infectious Disease Dynamics and Department of Entomology, Penn State. "However, much of the work on the Wolbachia-malaria interaction has been conducted under highly simplified laboratory conditions. In this study, we investigated the ability of Wolbachia to block transmission of malaria -- Plasmodium -- parasites across variable environmental conditions, which are more reflective of conditions in the field."

The researchers used a species of malaria parasite -- Plasmodium yoelii -- that affects rodents and the mosquito Anopheles stephensi as a model system to investigate whether Wolbachia would block the ability of the malaria parasite to infect the mosquitoes. The scientists divided the mosquitoes into an uninfected control group and a group infected with Wolbachia. Next, the team raised all groups of mosquitoes in incubators set to different experimental temperatures -- 68, 72, 75, 79 and 82 degrees Fahrenheit.

In addition, the team identified a previously undiscovered effect of Wolbachia. Infection with the bacterium reduced the development of sporozoites across all temperatures, suggesting that Wolbachia and malaria parasites may compete for similar hosts.

"Typically, the more oocysts a mosquito has on its midgut, the more sporozoites it produces," Murdock said. "So, depending on the environmental temperature, Wolbachia either reduced, enhanced or had no effect on the number of oocysts. At 75 degrees Fahrenheit, Wolbachia-infected mosquitos had three times the numbers of oocysts relative to uninfected mosquitoes. Thus, we would predict these mosquitoes to produce more sporozoites. But instead we see that this is not the case, and that is because Wolbachia infection significantly reduces the number of sporozoites produced per oocyst regardless of the environmental temperature. This effect counteracts the enhancement we see at 75 degrees Fahrenheit. How the influence of Wolbachia on parasite establishment and the production of sporozoites under different temperatures plays out to ultimately affect transmission remains to be determined."

The researchers published their results in a recent issue of Nature Scientific Reports.

According to Murdock, the team's results demonstrate that the transmission-blocking ability of Wolbachia is significantly influenced by the environment.

"These results suggest that the development of this promising control technology requires an improved understanding of how mosquitoes, Wolbachia and malaria parasites will interact in diverse transmission settings," she said. "The worst-case scenario is not whether this technology will be ineffective under particular environmental conditions, but whether or not there is a possibility that certain environments will actually enhance malaria transmission by Wolbachia."

The researchers plan to duplicate their experiment using a species of malaria parasite that affects humans to determine whether or not the temperature effects they observed in the mouse model system also will be observed in a human system. The team plans to explore the effects of additional environmental variation -- such as daily temperature fluctuation and differential access to food resources in the mosquito larval and adult environments -- on the transmission-blocking ability of Wolbachia.

The National Science Foundation, National Institutes of Health and Pennsylvania Department of Health supported this research. 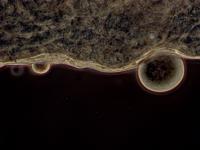