Two spotted seals orphaned as pups in the Arctic are now thriving at UC Santa Cruz's Long Marine Laboratory, giving scientists a rare opportunity to learn about how these seals perceive their environment. In a comprehensive study of the hearing abilities of spotted seals, UCSC researchers found that the seals have remarkably sensitive hearing in both air and water.

The findings, published February 26 in the Journal of Experimental Biology, are important for understanding how spotted seals might be affected by noise from human activities in the rapidly changing Arctic environment. Reductions in sea ice due to climate change have led to increased shipping and industrial activity in the Arctic, including oil and gas exploration. Coauthor Colleen Reichmuth, director of the Pinniped Cognition and Sensory Systems Laboratory at UCSC, said few studies have been done on Arctic seals, which include the spotted seal, ringed seal, bearded seal, and several other species.

"We wanted to develop a better understanding of how Arctic seals use sound in their environment and how human intrusions and other changes in that environment may influence them," Reichmuth said.

Using a specialized acoustic chamber to test the spotted seals' hearing, the researchers measured the lowest hearing thresholds ever recorded for a marine mammal in air. "In their range of most sensitive hearing, they can detect airborne sounds as well as terrestrial carnivores, like cats and dogs," said Jillian Sills, a graduate student in ocean sciences at UC Santa Cruz and first author of the paper. This makes sense, because the seals have to be vigilant for predators such as polar bears when they haul out on the ice, which they do to rest, molt, give birth, and nurse their pups.

In water, the range over which the spotted seals' hearing is most sensitive covers a remarkable seven octaves. In fact, they hear almost as well in water as fully aquatic species such as dolphins and porpoises. While the cetaceans have better sensitivity to higher-frequency sounds, the seals hear better at lower frequencies. "These spotted seals actually hear much better in both air and water than was previously thought based on earlier data for harp seals and ringed seals," Sills said.

The researchers also looked at how noise in the environment can interfere with seals' hearing. This "masking data" can be used to estimate, for example, the size of the zone around a noise source within which a seal would be unable to hear another seal some distance away. "Quantitative estimates of zones of masking around particular noise sources are relevant for management decisions about the potential effects of noise on hearing," Sills said.

Overall, the hearing of spotted seals is very similar to that of harbor seals, a relatively well studied temperate species. "Our findings suggest that we can probably apply much of what we know about harbor seals to spotted seals. For harbor seals, we know a lot more about how different types of sounds interfere with hearing, and how their hearing sensitivity can be reduced after exposure to very loud sounds," Sills said.

The use of seismic "airguns" to map oil and gas reserves beneath the seafloor is a particular concern because they emit intense pulses of very loud noise. Depending on the survey, the pulses may be emitted every 10 to 20 seconds for days on end, and the low-frequency sound can travel long distances through the water. Little is known about the extent to which this kind of noise could cause behavioral disturbances, mask sounds the animals need to hear, or possibly cause hearing loss or physical harm to seals close to the source, Sills said.

"We don't know as much about behavioral effects as we would like to because it's so difficult to do research in the Arctic. At least now we are starting to learn about the hearing sensitivity of these seals, which is a first step toward understanding how they perceive sound in air and water, and how they might be influenced by increasing noise levels," she said.

Reichmuth said the researchers were not surprised to find that spotted seals have sensitive hearing, despite earlier reports suggesting otherwise. "Because they're hunting under water and living in dark conditions for parts of the year, we assumed that hearing would be an important sensory modality," she said.

Although spotted seals are not considered threatened or endangered in U.S. waters, the loss of sea ice in the Arctic is a concern for the future of these and other ice seals. Sills emphasized that any potential impacts of increased noise on ice seals must be considered in the context of other threats. "It's difficult to separate out impacts from multiple sources. These animals will have to deal with the combination of multiple changes in their environment happening at the same time," she said.

The two spotted seals at Long Marine Lab, named Amak and Tunu, are the only spotted seals in captivity outside of Japan. The researchers are currently conducting similar hearing sensitivity studies with two ringed seals at the lab, and they hope to be able eventually to study bearded seals as well.

In addition to Sills and Reichmuth, Brandon Southall, an adjunct researcher at UCSC's Institute of Marine Sciences and president of SEA, Inc., contributed to the spotted seal study and is a coauthor of the paper. This research was funded by the International Association of Oil and Gas Producers through their E&P Joint Industry Program on Sound and Marine Life. 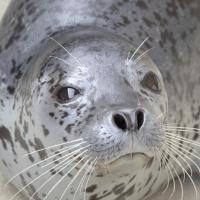