Chemists at Johannes Gutenberg University Mainz (JGU) have developed a method that reliably hinders hazardous seawater fouling and is effective, affordable, and easy on the environment. Fouling can occur, for example, as the result of the growth of bacteria, algae, or mollusks in harbor facilities, on boat hulls, and aquaculture netting. The resultant damage and consequential costs can be significant. It is estimated that these are equivalent to 200 billion dollars annually in the shipping industry alone. Protective coatings applied to vessels usually contain copper-based biocides. These have the disadvantage that they harm the environment while resistance to them can also develop. In order to find an alternative, the Mainz-based research team of Professor Wolfgang Tremel decided to simulate a defense mechanism employed by algae and established that cerium dioxide nanoparticles can effectively prevent fouling. This discovery could contribute towards the production of new protective coatings that are much less environmentally harmful than the hull coatings in use to date.

Marine algae utilize secondary metabolic products in order to provide themselves with a form of chemical defense against micro-organisms and predators. These halogenated secondary metabolites specifically prevent bacterial biofilms, other algae, and even barnacles becoming attached to and developing on larger formations of algae, sponges, and other creatures. Halogenated compounds produced by the red seaweed Delisea pulchra, for instance, inhibit bacterial fouling but are neither toxic nor growth-retarding. Instead, they scupper what is known as quorum sensing, i.e, a system used by bacteria to communicate with the help of messenger substances that results in the formation of biofilms. The structures of the halogenated compounds synthesized by seaweeds are similar to those of these substances so that they cause a blockade of the bacterial receptors and suppress the switchover of bacterial gene regulation to biofilm formation. This form of interference with bacterial gene regulation is also of pharmaceutical interest as it is known that pathogenic bacteria can protect themselves against attack by the immune system and the effect of antibiotics by forming biofilms, for instance on the epithelium of the respiratory system.

This natural defense process has been mimicked by the Mainz-based team of chemists using nanoparticles of cerium dioxide. "Field tests have shown that cerium dioxide is an ecologically acceptable alternative to cuprite, a substance that is used as a biocide together with copper thiocyanate and copper pyridine at concentrations of up to 50 percent in anti-fouling coatings," explained Professor Wolfgang Tremel of JGU's Institute of Inorganic Chemistry and Analytical Chemistry. But such copper compounds are toxic and accumulate in the environment. This is why some countries, such as Canada and Denmark, have imposed strict limitations on the use of copper-based anti-fouling coatings.

A cost-effective and environmentally-friendly alternative to cupriferous biocides

"All modern catalytic converters in vehicles use cerium dioxide. It is non-toxic and chemically extremely stable," added Karoline Herget, who wrote her doctoral thesis on the project. She is convinced that cerium dioxide is a practical and cost-effective alternative to conventional biocides.

Cerium dioxide is an oxide of the rare earth element cerium and a by-product of the process of extraction of rare earth metals. Despite belonging to the family of rare earth elements, cerium itself is not particularly scarce. Its cost is thus comparable with that of cuprite (copper(I) oxide), although it is effective in far lower quantities. "What we have here is an environmentally compatible component of a new generation of anti-fouling coatings that simulate the natural defense systems employed by marine organisms. What is important is that it is effective not only under laboratory conditions but also when actually used in the aquatic environment," Herget concluded. Steel panels with cerium oxide coatings can be exposed to seawater for weeks on end without becoming covered by bacteria, algae, mollusks, or barnacles. Reference samples with conventional water-based coatings develop massive fouling over the same time period.

Biofilms are around virtually everywhere. They are present in drinking water pipes and clarification plants, in ground water, water filtration and cooling systems, on practically all surfaces such as food packaging, door handles, push buttons, keyboards, and other elements made of plastic, and, when it comes to medicine, they also develop in catheter tubes. The main problem in connection with combating these using biocides and antibiotics is the risk of the development of resistance. This drawback could be effectively circumvented in an ecologically acceptable manner by applying surface coatings of cerium dioxide particles. This innovative technique thus has potential applications in the fields of boat and exterior coatings, roof coverings, outdoor textiles, polymer membranes used for desalination, enclosures employed in aquaculture, and in many plastic components.

The research project was undertaken in cooperation with BASF and the results have been published in the journal Advanced Materials. 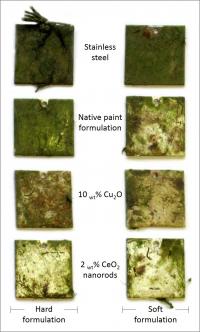