RIVERSIDE, Calif. — Scientists at the University of California, Riverside have discovered a fossil of a newly discovered organism from the "Ediacara Biota" — a group of organisms that occurred in the Ediacaran period of geologic time.

Named Plexus ricei and resembling a curving tube, the organism resided on the Ediacaran seafloor. Plexus ricei individuals ranged in size from 5 to 80 centimeters long and 5 to 20 millimeters wide. Along with the rest of the Ediacara Biota, it evolved around 575 million years ago and disappeared from the fossil record around 540 million years ago, just around the time the Cambrian Explosion of evolutionary history was getting under way.

"Plexus was unlike any other fossil that we know from the Precambrian," said Mary L. Droser, a professor of paleontology, whose lab led the research. "It was bilaterally symmetrical at a time when bilaterians—all animals other than corals and sponges—were just appearing on this planet. It appears to have been very long and flat, much like a tapeworm or modern flatworm."

"Ediacaran fossils are extremely perplexing: they don't look like any animal that is alive today, and their interrelationships are very poorly understood," said Lucas V. Joel, a former graduate student at UC Riverside and the first author of the research paper. Joel worked in Droser's lab until June 2013.

He explained that during the Ediacaran there was no life on land. All life that we know about for the period was still in the oceans.

"Further, there was a complete lack of any bioturbation in the oceans at that time, meaning there were few marine organisms churning up marine sediments while looking for food," he said. "Then, starting in the Cambrian period, organisms began churning up and mixing the sediment."

According to the researchers, the lack of bioturbators during the Ediacaran allowed thick films of (probably) photosynthetic algal mats to accumulate on ocean floors—a very rare environment in the oceans today. Such an environment paved the way for many mat-related lifestyles to evolve, which become virtually absent in the post-Ediacaran world.

"The lack of bioturbation also created a very unique fossil preservational regime," Joel said. "When an organism died and was buried, it formed a mold of its body in the overlying sediment. As the organism decayed, sediment from beneath moved in to form a cast of the mold the organism had made in the sediment above. What this means is that the fossils we see in the field are not the exact fossils of the original organism, but instead molds and casts of its body."

Paleontologists have reported that much of the Ediacara Biota was comprised of tubular organisms. The question that Droser and Joel addressed was: Is Plexus ricei a tubular organism or is it an organism that wormed its way through the sand, leaving a trail behind it?

Plexus ricei was so named for plexus, meaning braided in Latin, a reference to the organism's morphology, and ricei for Rice, the last name of the South Australian Museum's Dennis Rice, one of the field assistants who helped excavate numerous specimens of the fossil.

"At this time, we don't know for sure that Plexus ricei was a bilateral but it is likely that it was related to our ancestors," Droser said.

She and Joel were joined in the research by James G. Gehling at the South Australian Museum. Joel is now a Ph.D. graduate student at the University of Michigan, Ann Arbor. 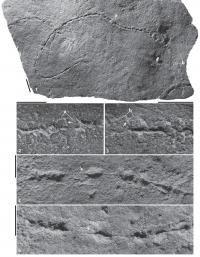