If these walls had ears, they might tell a homeowner some interesting things. Like when water is dripping into an attic crawl space, or where an open window is letting hot air escape during winter.

The walls do have ears, thanks to a device that uses a home's electrical wiring as a giant antenna. Sensors developed by researchers at the University of Washington and the Georgia Institute of Technology use residential wiring to transmit information to and from almost anywhere in the home, allowing for wireless sensors that run for decades on a single watch battery. The technology, which could be used in home automation or medical monitoring, will be presented this month at the Ubiquitous Computing conference in Copenhagen, Denmark.

Low-cost sensors recording a building's temperature, humidity, light level or air quality are central to the concept of a smart, energy-efficient home that automatically adapts to its surroundings. But that concept has yet to become a reality.

"When you look at home sensing, and home automation in general, it hasn't really taken off," said principal investigator Shwetak Patel, a UW assistant professor of computer science and and of electrical engineering. "Existing technology is still power hungry, and not as easy to deploy as you would want it to be."

That's largely because today's wireless devices either transmit a signal only several feet, Patel said, or consume so much energy they need frequent battery replacements.

"Here, we can imagine this having an out-of-the-box experience where the device already has a battery in it, and it's ready to go and run for many years," Patel said. Users could easily sprinkle dozens of sensors throughout the home, even behind walls or in hard-to-reach places like attics or crawl spaces.

Patel's team has devised a way to use copper electrical wiring as a giant antenna to receive wireless signals at a set frequency. A low-power sensor placed within 10 to 15 feet of electrical wiring can use the antenna to send data to a single base station plugged in anywhere in the home.

The device is called Sensor Nodes Utilizing Powerline Infrastructure, or SNUPI. It originated when Patel and co-author Erich Stuntebeck were doctoral students at Georgia Tech and worked with thesis adviser Gregory Abowd to develop a method using electrical wiring to receive wireless signals in a home. They discovered that home wiring is a remarkably efficient antenna at 27 megahertz. Since then, Patel's team at the UW has built the actual sensors and refined this method. Other co-authors are UW's Gabe Cohn, Jagdish Pandey and Brian Otis.

Cohn, a UW doctoral student in electrical engineering, was lead student researcher and tested the system. In a 3,000-square-foot house he tried five locations in each room and found that only 5 percent of the house was out of the system's range, compared to 23 percent when using over-the-air communication at the same power level. Cohn also discovered some surprising twists – that the sensors can transmit near bathtubs because the electrical grounding wire is typically tied to the copper plumbing pipes, that a lamp cord plugged into an outlet acts as part of the antenna, and that outdoor wiring can extend the sensors' range outside the home.

While traditional wireless systems have trouble sending signals through walls, this system actually does better around walls that contain electrical wiring.

Most significantly, SNUPI uses less than 1 percent of the power for data transmission compared to the next most efficient model.

The existing prototype uses UW-built custom electronics and consumes less than 1 milliwatt of power when transmitting, with less than 10 percent of that devoted to communication. Depending on the attached sensor, the device could run continuously for 50 years, much longer than the decade-long shelf life of its battery.

"Basically, the battery will start to decompose before it runs out of power," Patel said.

Longer-term applications might consider using more costly medical-grade batteries, which have a longer shelf life. The team is also looking to reduce the power consumption even further so no battery would be needed. They say they're already near the point where solar energy or body motion could provide enough energy. The researchers are commercializing the base technology, which they believe could be used as a platform for a variety of sensing systems.

Another potential application is in health care. Medical monitoring needs a compact device that can sense pulse, blood pressure or other properties and beam the information back to a central database, without requiring patients to replace the batteries.

The technology does not interfere with electricity flow or with other emerging systems that use electrical wiring to transmit Ethernet signals between devices plugged into two outlets.

Patel's group is also presenting a system that uses electrical noise to monitor energy use in the home, which is now owned by Belkin International, Inc. through an acquisition earlier this year.

The group also will present a device, powered by water pressure changes, that can use these changes in pressure to monitor water consumption throughout the home from a single point.

All three presentations will be in the Home Infrastructure session Tuesday, Sept. 28 from 2 p.m. to 3:30 p.m. Central European time. The conference website is http://www.ubicomp2010.org/ 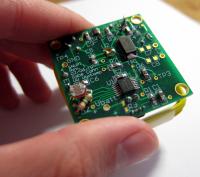