An agreement signed on Feb. 19 among four Guam agencies and one non-government entity will formalize a working alliance among coral reef scientists and managers related to reef restoration, rehabilitation, and damage mitigation. The memorandum of understanding launches the Guam Reef Restoration and Intervention Partnership (GRRIP) among the University of Guam, the Guam Bureau of Statistics and Plans, the Guam Department of Agriculture, the Guam Environmental Protection Agency, and UnderWater World Inc.

"By formalizing this MOU, it gives the agencies the weight to allow their personnel to get involved in these kinds of activities," said Laurie J. Raymundo, interim director of the UOG Marine Laboratory and co-chair of GRRIP. "If we had to hire divers to come out and do this, the cost would be prohibitive, so by partnering we're allowing this to be doable."

Though representatives of these agencies have been working together for decades -- responding to ship groundings on reefs, establishing and maintaining coral nurseries, relocating corals in threatened areas, and re-establishing populations of selected species in target reef areas ­-- the MOU now brings them together formally in the common cause of managing and rehabilitating Guam's threatened coral reefs in an era of rapid climate change.

GRRIP will carry out activities of restoration, rehabilitation, and damage mitigation in accordance with the Guam Coral Reef Resilience Strategy that was formalized by Executive Order 19-16 in 2019. The agreement outlines specific responsibilities for each partner, such as providing materials and personnel for field activities, assisting with public outreach, data collection, and documentation, and hosting member trainings.

In a recent $856,000 National Fish & Wildlife Foundation grant awarded to the UOG Marine Lab, GRRIP will be of assistance in augmenting populations of essential fish habitat species that were decimated in the severe coral bleaching episodes of 2013-2017. The partnership will provide trained personnel for the outplanting phases of this work.

MOUs are also being developed with The Nature Conservancy, the National Park Service, and the National Oceanic and Atmospheric Administration. 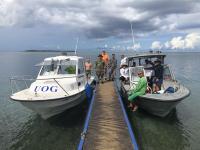 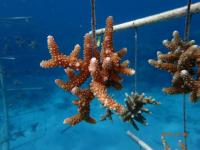