Fragmentation of ecologically important core forests within the northern Appalachians -- driven by pipeline and access road construction -- is the major threat posed by shale-gas development, according to researchers, who recommend a change in infrastructure-siting policies to head off loss of this critical habitat.

She said that forest edges created by corridors have higher rates of predation compared to interior forest for some species, and barrier effects created by linear corridors can restrict movement by other species and alter their home ranges, decreasing gene flow and genetic diversity. Linear corridors also may be used as travel lanes for some species or facilitate the invasion of exotic plant species into previously inaccessible habitat.

Although development of natural gas from deep shale formations has occurred in Pennsylvania for slightly more than 12 years -- the first successful nontraditional gas well was drilled in Washington County in November 2004 -- the Marcellus play currently is just 10 percent of what it is expected to be when fully mature, Brittingham said.

"So if Pennsylvania is to have core, interior forests left after shale-gas development ramps up in coming decades, policies regulating placement of well pads, pipelines, access roads and other infrastructure need to change."

In findings reported this month in the Journal of Environmental Management, the researchers pointed out that current trends of land-use change resulting from shale-gas development suggest that the greatest loss of core forest will occur with well pads constructed farthest from pre-existing pipelines, requiring new pipelines and roads to be built to connect pads.

"Our results suggest that to reduce future forest fragmentation, new pads should be placed near pre-existing pipelines, and methods to consolidate pipelines with other infrastructure should be used," Brittingham explained. "Without these mitigation practices, we will continue to lose core forest as a result of new pipelines and infrastructure, particularly on private land."

"As a result, loss of core forest is more than double on private land than public land, which likely results from better management practices implemented on public land," she said. "We think these differences occur because public land tends to benefit from greater expertise and landowner size."

Until now, knowledge about specific infrastructure effects on forest habitat has been limited by a lack of spatial tracking of infrastructure development in different land uses. This study used high-resolution aerial imagery, land-cover data, and well-point data to quantify shale-gas development across four time periods -- 2010, 2012, 2014 and 2016 including, the number of wells permitted, drilled and producing gas -- a measure of pipeline development; land-use change; and forest fragmentation on both private and public land.

The researchers conducted this work in Lycoming County, located in Pennsylvania's northcentral region in the northern Appalachian Mountains. Most of the county, which encompasses more than 1,200 square miles, is underlain by the Marcellus Shale formation and is highly forested -- 84 percent prior to shale-gas development in 2005.

The Pennsylvania Department of Environmental Protection database reports that Lycoming County ranks fifth in the state for active well drilling, with 926 wells or a well density of 22 pads per 100 square miles, as of April 2016. The majority of shale-gas development in the study area occurred since 2010, Langlois said, resulting in almost 4 percent loss of core forest within just six years. "Similar to other studies, we found that while a small portion of the total land area -- less than 1 percent -- was directly converted for infrastructure, indirect impacts caused by habitat fragmentation were far greater."

Shale gas threat to forests can be eased by consolidating infrastructure 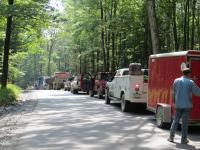 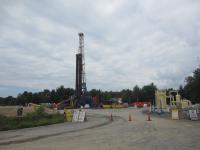