Beneficial bacteria in the gut of moth larvae produce an antimicrobial agent that kills competing bacteria which otherwise have detrimental effects on insect development. An international team of scientists under the direction of the Max Planck Institute for Chemical Ecology in Jena, Germany, were able to demonstrate for the first time that symbiotic Enterococcus mundtii bacteria secrete the antimicrobial peptide mundticin. It enters harmful germs in the gut of the African cotton leafworm Spodoptera littoralis and kills the unicellular organisms. The symbionts thus ensure a healthy gut flora and reduce the infection risk of the pest insect. (Cell Chemical Biology, January 2017, DOI: 10.1016/j.chembiol.2016.11.015)

The African cotton leafworm Spodoptera littoralis, a major agricultural pest, is widespread, especially in the Mediterranean. It feeds on a broad range of host plants, such as vegetables, fruit, flowers and crops. According to this new study, the evolutionary success of this insect is partially based on a symbiotic association with microorganisms in its gut.

In 2012, researchers from the Department of Bioorganic Chemistry at the Max Planck Institute in Jena showed that the microbiome of Spodoptera littoralis, representing the sum of all microorganisms colonizing this pest insect, changed considerably during larval development. Whereas first-instar larvae housed a variety of Enterococcus species, late-instar caterpillars were dominated by Enterococcus mundtii bacteria. Related pathogenic Enterococcus species, such as Enterococcus faecalis and Enterococcus casseliflavus, had been completely eradicated from the microbiome of the caterpillars. These observations motivated the scientists to study the factors which influence the composition of the microbiome during insect development in more detail.

Led by Wilhelm Boland, the team of researchers cultivated Enterococcus bacteria for so-called agar diffusion tests. This method is used to show which bacteria spread or are inhibited in their growth when other microorganisms are present in the medium. They discovered that Enterococcus mundtii bacteria, which are dominant in the gut of the larvae, excrete a chemical substance into the medium. This compound causes the death of other bacterial species. Colleagues from the Leibniz Institute for Natural Product Research and Infection Biology analyzed and identified it as the peptide mundticin KS, a so-called bacteriocin which is produced by several bacteria in order to eliminate competing bacterial strains.

Further investigation revealed that Enterococcus mundtii bacteria produce mundticin as an internal antibiotic in the gut of the caterpillars. The researchers tried to infect insect larvae which were associated with the symbiotic bacteria with pathogenic Enterococcus faecalis bacteria. Thanks to the symbionts, however, the insects were able to successfully clear the pathogens from their guts. In comparison, larvae which housed an Enterococcus mundtii strain without the gene for the synthesis of mundticin were powerless against pathogen infection. If the infected caterpillars were fed on a diet that contained mundticin many larvae recovered and the pathogen decreased by more than 60% within 24 hours.

"Mundticin is the first microbial compound from the gut of an organism which has been characterized functionally with regard to its effect on the whole gut flora," states Boland. Which microorganisms in the gut survive and which don't, however, also depend on the food which contains plant secondary metabolites. "The microbiome is the result of a delicate balance of food-derived, insect-derived and microbial products." Interactions between those metabolites are currently under investigation.

Many lepidopteran larvae cause major damage in agriculture. In order to control them, farmers have been using bacteria as biological pesticides. "Detailed knowledge of the bacteriocins' mode of action and the identification of genes that confer resistance against these compounds could significantly contribute to improving pest control with bacteriocin-resistant bacteria," says first author Yongqi Shao, who performed the studies in Jena. Shao has been doing research since 2015 at Zhejiang University in Hangzhou, China. The study also provides interesting approaches for medical research. After all, bacteriocins are considered possible alternatives to conventional antibiotics, many of which are facing increasing problems of resistance.

The study was supported in the framework of the Collaborative Research Center 1127 "Chemical Mediators in Complex Biosystems" from the German Research Foundation. [AO/KG]

Bodyguards in the gut have a chemical weapon 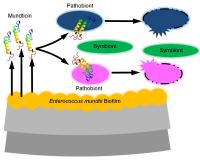