Physicists have found a radical new way confine electromagnetic energy without it leaking away, akin to throwing a pebble into a pond with no splash.

The theory could have broad ranging applications from explaining dark matter to combating energy losses in future technologies.

"This problem has puzzled many people. It took us a year to get this concept clear in our heads," said Dr Miroshnichenko, from the ANU Research School of Physics and Engineering.

The fundamental new theory could be used in quantum computers, lead to new laser technology and may even hold the key to understanding how matter itself hangs together.

"Ever since the beginning of quantum mechanics people have been looking for a configuration which could explain the stability of atoms and why orbiting electrons do not radiate," Dr Miroshnichenko said.

The absence of radiation is the result of the current being divided between two different components, a conventional electric dipole and a toroidal dipole (associated with poloidal current configuration), which produce identical fields at a distance.

If these two configurations are out of phase then the radiation will be cancelled out, even though the electromagnetic fields are non-zero in the area close to the currents.

Dr Miroshnichenko, in collaboration with colleagues from Germany and Singapore, successfully tested his new theory with a single silicon nanodiscs between 160 and 310 nanometres in diameter and 50 nanometres high, which he was able to make effectively invisible by cancelling the disc's scattering of visible light.

This type of excitation is known as an anapole (from the Greek, 'without poles').

Dr Miroshnichenko's insight came while trying to reconcile differences between two different mathematical descriptions of radiation; one based on Cartesian multipoles and the other on vector spherical harmonics used in a Mie basis set.

"The two gave different answers, and they shouldn't. Eventually we realised the Cartesian description was missing the toroidal components," Dr Miroshnichenko said.

"We realised that these toroidal components were not just a correction, they could be a very significant factor."

Dr Miroshnichenko said the confined energy of anapoles could be important in the development of tiny lasers on the surface of materials, called spasers, and also in the creation of efficient X-ray lasers by high-order harmonic generation. 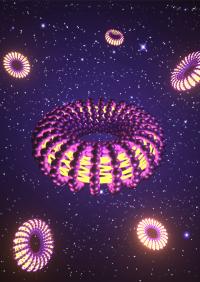