Joe Nuth loves dust. Among astronomers, that puts him in a minority.

"The traditional astronomers -- the people looking at galaxies and stars -- they hate dust," said Nuth, a planetary scientist at NASA's Goddard Space Flight Center in Greenbelt, Maryland. "It's the stuff that's in their way."

Like the Earthly dust that gathers under your bed, cosmic dust is hard to avoid. "It's about two percent of the total stuff, from here to anywhere," said Nuth. But it doesn't take up all that space for nothing.

Dust condenses into asteroids and planets. Giant dust clouds can carry gases from a dying star to fertilize a new one. Dust surrounding young planets can keep them warm, providing surfaces for water to collect and organic molecules to form. But whether any of these effects occurs depends on just how these tiny dust grains are constructed, at the smallest of scales.

That's why Nuth is launching the Determining Unknown yet Significant Traits, or DUST sounding rocket. A collaboration between NASA and the Japan Aerospace Exploration Agency, the rocket will make a brief flight into space, carrying lab equipment into a zero-gravity environment. There, Nuth and his team will build dust grains of their very own, hoping to shed light on the outsized role these tiny specks play in our universe. DUST's first opportunity to launch from the White Sands Missile Range in New Mexico begins on Oct. 7, 2019.

As prevalent as it may be, cosmic dust doesn't form easily. Dust grains are born when individual atoms collide and stick to one another. But in space, direct collisions are rare (the space where dust forms is about 2.7 billion times less dense than air at sea level). Even when atoms collide, they may not stick. In a previous experiment, Nuth found that for every 100,000 collisions between zinc atoms, only three stick to a growing dust crystal.

Once a few atoms cram together, a wobbly Jenga-like tower emerges. "You're going up a ladder of instability," said Nuth. "Small clusters really want to fall apart." But if you can surround enough atoms on all sides, the system starts to stabilize. You have a growing dust grain.

It's when dust grains themselves collide that things get interesting. If they pack together like snow into snowballs, they don't react much with light or heat. But if they instead link together into lacy, snowflake-like structures, they do much more. Such crystalline dust aggregates catch starlight like a sail, whisking gases from one star to the next. They also trap heat, potentially changing the fate of planets they cover. "If you've got a growing planet surrounded by a dusty blanket, that's a different thermal environment than without," said Nuth. "Dust affects the way planets grow."

But how these dust grains form and aggregate together is still not well understood. Figuring that out may pay major returns across space physics.

So far, Nuth has done most of his work in the lab, but Earth's gravity imposes severe limitations. His experiments require heating materials to well over 1000 degrees Fahrenheit. But such high temperatures create convection -- the churning of air that happens in your oven -- that doesn't happen in deep space. "To measure dust grain growth, we need a constant environment," said Nuth. To get that, you need to go to microgravity.

Nuth teamed up with his former postdoc Yuki Kimura of Hokkaido University in Japan to launch lab equipment into space. The payload, designed by Kimura, weighs about 330 pounds. "It's about as big as a small motorbike," said Kimura.

Inside, a set of metal wires coated with magnesium silicates -- would-be dust particles -- are waiting for launch. Once the rocket enters space and experiences microgravity, the wire heats up and the atoms and molecules diffuse away. Some collide, stick, and begin to form dust grains; others won't. Using spectroscopy and other measures, the DUST experiment will measure when grains start to grow and link together into aggregates, noting at what temperature and density they do the best. The payload will then fall back to Earth to be collected for further analysis.

When the dust settles

Even before retrieving the payload, Nuth will be in the lab working on the Earth-based part of the experiment. His question is whether dust grain formation could be simpler than expected.

In principle, dust grains can form from any of the 92 naturally-occurring elements in the periodic table. "But it's very tough to model," said Nuth. Each element has its own quirks; taking them all into account at once is a major challenge.

In previous experiments, Nuth learned that some elements block one another: If iron gets into a growing dust grain, for instance, it tends to keep magnesium out. He's exploring this behavior in the lab, hoping to reduce a 92-variable equation into something much more manageable. "It's much easier if you only have to worry about one or two particular materials," said Nuth.

The results from the rocket, paired with Nuth's work in the lab, aim to shed light on how the dusty two percent of our visible universe works. Overall, the DUST experiment reminds us that the key to the unimaginably large sometimes lies in the incredibly tiny.

The DUST sounding rocket will launch from the White Sands Missile Range on a Black Brant IX rocket. During its approximately 14 minute flight, the rocket will reach an estimated altitude of 200 miles before falling back to Earth for recovery.

A dusty lab in the sky 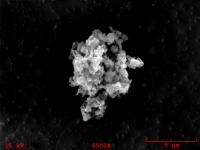