If you are like most people, you probably enjoy the twinkling of stars that blanket the sky on a clear summer night. If you are an astronomer, chances are you find it extremely annoying.

A team of University of Arizona astronomers led by Michael Hart has developed a technique that allows them to switch off the twinkling over a wide field of view, enabling Earth-based telescopes to obtain images as crisp as those taken with the Hubble Space Telescope, and much more quickly.

They describe the technique, called laser adaptive optics, in the Aug. 5 issue of Nature.

Atmospheric turbulence blurs the light from celestial objects by the time it reaches the mirror of a ground-based telescope. Most of the distortion happens less than a half mile above ground, where heat rising from the surface ruffles the air.

Think of laser adaptive optics as noise-canceling headphones, only for light waves instead of sound waves. A bundle of laser beams and a pliable mirror in the telescope optics form the heart of the system.

From their observatory on Mount Hopkins south of Tucson, Ariz., Hart and his group point a bundle of green laser beams into the night sky. Some of the laser light bounces off oxygen and nitrogen molecules high up in the atmosphere, creating five artificial stars spread across the field of view.

"We observe what the turbulence in the atmosphere does to them," explains Hart, a professor of astronomy in UA's Steward Observatory and department of astronomy. "The light that is reflected back tells us what we need to know about the turbulence."

The turbulence data are then fed into a computer that controls the adaptive mirror, whose back side is studded with so-called actuators, small magnetic pins surrounded by coils.

When the computer sends electric currents through the coils, the actuators move, not unlike a loudspeaker translates electric signals from an amplifier into movements of the sound membranes. Hart's adaptive mirror has 336 actuators glued to its back side that cause the mirror to warp just enough to cancel out the flickering caused by the atmosphere. The corrective movements are too tiny for the human eye to see and happen a thousand times each second.

The difference between a telescope with adaptive optics and one without is similar to a camera with a built-in image stabilizer compared to one without.

According to Hart, astronomers and engineers have advanced adaptive optics considerably over the past 15 to 20 years, but until now, the technology was fraught with a fundamental limitation: Atmospheric blurring could only be removed along a very narrow line of sight.

"It's like being able to see sharp through a pin hole, while the rest of your field of view looks like frosted glass," said Hart. "Our technique makes the pin hole much bigger."

The laws of physics impose a trade-off between field of view and resolution. Hart's group sacrifices some of the very high resolution to gain a larger field of view, but for many science endeavors this trade-off is well worth taking, he said.

One such endeavor is the study of very old galaxies that formed around 10 billion years ago when the universe was less than a quarter of its current age. Known to astronomers as high red-shift galaxies, these objects are billions of light years away.

"To understand the evolution of those ancient galaxies, we have to observe thousands of them and study their spectral characteristics and chemical composition," Hart said, "and taking a spectrum of a high red-shift galaxy takes a long time because they are so faint."

"With our new adaptive optics technique, you can now observe dozens at a time. Sampling thousands of galaxies' spectra becomes feasible."

Supermassive star clusters are another example.

"In those clusters, stars are being born as we speak and that's where we have to point our telescopes to learn about the processes that drive star formation."

"There is still a lot that remains mysterious," Hart added, "mostly because these clusters extend over several fields of view and are jam-packed with stars that seem to run into each other unless you can get a super-sharp image."

But before astronomers can even begin to analyze light spectra of the stars in the cluster, they have to disentangle them first.

"You need to know which stars are actually part of the cluster and which ones only happen to be in your line of sight," Hart explains. "To do that, you compare images taken a year or so apart. If you find stars that have moved in the meantime, it means they are not gravitationally bound to the cluster. It is much easier to pinpoint the position of a star if you have an image that is sharp rather than fuzzy."

With the new adaptive optics system, entire star clusters may be examined in a single pointing, the authors write in their article.

Hart's group expects their technique to be applied on very large telescopes such as the Giant Magellan Telescope, which is being developed by astronomers at the University of Arizona and elsewhere.

"We haven't yet tapped out the limit of our adaptive optics system," Hart said. "We can now cancel the atmospheric turbulence over a field of two arc minutes, which is about the diameter of one-fifteenth of a full moon."

At the cosmic distances of deep space, that's a lot of star clusters and a lot of high red-shift galaxies.

Taking the twinkle out of the night sky 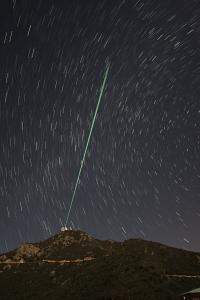