A study examines the link between annual temperatures and the timing of houbara migration. Birds have internal cues to prepare for migration. However, the mechanisms by which external cues, such as temperature, fine-tune birds' migration departure times are unclear. Robert Burnside and colleagues fitted 48 wild Asian houbaras in Uzbekistan with satellite transmitters to track individuals over multiple migrations between 2011 and 2020. Asian houbaras breeding in Uzbekistan travel up to thousands of kilometers to their wintering grounds in southern Central Asia. Analyzing repeated migration departure decisions of houbaras revealed that individual birds started migration under similar local temperature conditions each year. Although departure responses to temperature varied among individuals, such responses were repeated at the individual level. Because of houbaras' responses to temperature, spring departures from wintering sites and subsequent arrival at breeding sites occurred earlier during years with warm spring temperatures than during years with cool spring temperatures. Furthermore, individuals typically arrived at their breeding grounds under similar temperature conditions each year. Departure repeatability among individuals was significantly greater with respect to temperature than to daytime length or wind velocity. The findings suggest that houbara populations can adapt their migration timing to annual temperature variability without invoking genetic changes, according to the authors. 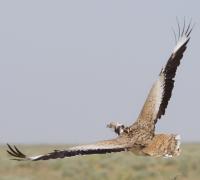