Adolescents and young adults who are heavy users of marijuana are more likely than non-users to have disrupted brain development, according to a new study. Pediatric researchers found abnormalities in areas of the brain that interconnect brain regions involved in memory, attention, decision-making, language and executive functioning skills. The findings are of particular concern because adolescence is a crucial period for brain development and maturation.

The researchers caution that the study is preliminary and does not demonstrate that marijuana use causes the brain abnormalities. However, "Studies of normal brain development reveal critical areas of the brain that develop during late adolescence, and our study shows that heavy cannabis use is associated with damage in those brain regions," said study leader Manzar Ashtari, Ph.D., director of the Diffusion Image Analysis and Brain Morphometry Laboratory in the Radiology Department of The Children's Hospital of Philadelphia.

The study appeared early last month in the Journal of Psychiatric Research. The current research builds on previous work by Ashtari and colleagues, who used the same imaging technology to analyze normal brain development in adolescent subjects.

In the current study, working with child psychiatrist Sanjiv Kumra, M.D., now at the University of Minnesota, Ashtari and colleagues performed imaging studies on 14 young men from a residential drug treatment center in New York State, as well as 14 age-matched healthy controls. All the study subjects were males, with an average age of 19. The researchers performed the imaging studies at Long Island Jewish Medical Center.

The 14 subjects from the drug treatment center all had a history of heavy cannabis use during adolescence. On average, they had smoked marijuana from age 13 till age 18 or 19, and reported smoking nearly 6 marijuana joints daily in the final year before they stopped using the drug.

The study team performed a type of magnetic resonance imaging scan called diffusion tensor imaging (DTI) that measures water movement through brain tissues. "The abnormal patterns of water diffusion that we found among the young men with histories of marijuana use suggest damage or an arrest in development of the myelin sheath that surrounds brain cells," said Ashtari. Myelin provides a coating around brain cells similar to insulation covering an electrical wire. If myelin does not function properly, signaling within the brain may be slower.

Myelin gives its color to the white matter of the brain, and covers the nerve fibers that connect different brain regions. "Our results suggest that early-onset substance use may alter the development of white matter circuits, especially those connections among the frontal, parietal and temporal regions of the brain," said Ashtari. "Abnormal white matter development could slow information transfer in the brain and affect cognitive functions."

Ashtari added that the findings are preliminary. Among other limitations of the study, such as a small sample size, five of the 14 subjects with heavy cannabis use also had a history of alcohol abuse, which may have contributed an effect. Also, it is possible that the brain abnormalities may have predisposed the subjects to drug dependence, rather than drug usage causing the brain abnormalities.

"Further research should be done to investigate the relation between repeated marijuana use and white matter development," said Ashtari. "However, our work reinforces the idea that the adolescent brain may be especially vulnerable to risky behaviors such as substance abuse, because of crucial neural development that occurs during those years."

About The Children's Hospital of Philadelphia: The Children's Hospital of Philadelphia was founded in 1855 as the nation's first pediatric hospital. Through its long-standing commitment to providing exceptional patient care, training new generations of pediatric healthcare professionals and pioneering major research initiatives, Children's Hospital has fostered many discoveries that have benefited children worldwide. Its pediatric research program is among the largest in the country, ranking third in National Institutes of Health funding. In addition, its unique family-centered care and public service programs have brought the 430-bed hospital recognition as a leading advocate for children and adolescents. For more information, visit http://www.chop.edu. 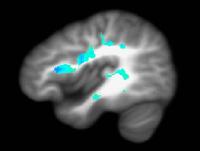