China's lunar exploration project can be divided into three steps: "orbiting", "landing" and "returning". At present, the first two have been completed, and the third step, "return", will be achieved by the CE-5, which is the first sample return satellite of China and is expected to drill at a depth of no less than 2 m and bring back about 2 kg of scientific samples. In June 2017, the landing region of CE-5 lunar probe was selected as the Rümker region, which is located in the northern Oceanus Procellarum on the lunar near side and has a long volcanic history and complex geological composition.

To select the specific sampling points within the Rümker region, many scholars have analyzed the topography and geology conditions, lighting and communication conditions, and thermophysical characteristics and so on, but few about features of lunar regolith.

To make up for this deficiency, Zhenzhan WANG, a researcher of the Chinese Academy of Sciences, conducted a study to retrieve the dielectric constant and thickness of lunar regolith based on Chang'e lunar microwave sounder (CELMS) data.

CELMS is the first passive microwave radiometer in the world to sound the lunar surface, which operated at four frequencies: 3, 7.8, 19.35, and 37 GHz, with radiometric resolution of 0.5 K. The brightness temperature (TB) sensed by CELMS is influenced by lunar surface conditions, such as temperature, topography, dielectric constant, lunar regolith thickness, and so on, so these parameters can be retrieved by developing relationships with TB.

In the multi-layer radiation transfer theory, the mare deposit is thought as two types: multi-layer regolith and underlying rock, and assuming that the temperature and dielectric constant in each layer are uniform. The radiation of the lunar surface can be simulated by calculating the emission and reflection of energy in each layer.

It can be seen from Figure 2 that the northwest of the study area has the largest regolith thickness, greater than 6m. In addition, the thickness of most areas is uniform and does not exceed 4 m. The Rümker E region shows the shallowest regolith thickness due to the impact effect. Considering the safety and operability of landing and sampling, the northwest with thick regolith is recommended, while the Rümker E should be eluded.

In addition, to reduce the effect of diurnal physical temperature on TB and highlight the features of lunar regolith, the normalized coefficient of diurnal TB was introduced. The coefficient can not only show the temperature difference between day and night, but also represent the dielectric characteristics and thickness of regolith to a certain extent, so it can play a role in verifying the inversion results.

The study provide further support for selecting sampling sites of CE-5 satellite in terms of the thickness distribution of regolith. On the other hand, the research also have important scientific significance for the depth mining and application of CELMS data.

This research was funded by the National Natural Science Foundation of China (Grant No. 41771405). 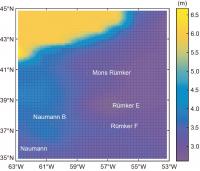