While African wildlife often run afoul of ranchers and pastoralists securing food and water resources for their animals, the interests of fauna and farmer might finally be unified by the "Sodom apple," a toxic invasive plant that has overrun vast swaths of East African savanna and pastureland.

Should the ominous reference to the smitten biblical city be unclear, the Sodom apple, or Solanum campylacanthum, is a wicked plant. Not a true apple, this relative of the eggplant smothers native grasses with its thorny stalks, while its striking yellow fruit provides a deadly temptation to sheep and cattle.

New research suggests, however, that certain wild African animals, particularly elephants, could be a boon to human-raised livestock because of their voracious appetite for the Sodom apple. A five-year study led by Princeton University researchers found that elephants and impalas, among other wild animals, can not only safely gorge themselves on the plant, but can efficiently regulate its otherwise explosive growth, according to a report in the journal Proceedings of the Royal Society B. Without elephants ripping the plant from the ground, or impalas devouring dozens of its fruits at a time, the shrub easily conquers the landscape.

Just as the governments of nations such as Kenya prepare to pour millions into eradicating the plant, the findings present a method for controlling the Sodom apple that is cost-effective for humans and beneficial for the survival of African elephants, explained first author Robert Pringle, a Princeton assistant professor of ecology and evolutionary biology.

"The Holy Grail in ecology is these win-win situations where we can preserve wildlife in a way that is beneficial to human livelihoods," Pringle said. Similarly, Princeton researchers published two studies in 2011 that showed that allowing livestock to graze with wild animals such as zebras greatly improved the quality of the domesticated animals' diet.

"It's a nice example of how conservation needn't be about sacrifice. It often is — let's be honest. But there are situations where you can get a win-win," Pringle said. "This opens the door for people whose main interest is cattle to say, 'Maybe I do want elephants on my land.' Elephants have a reputation as destructive, but they may be playing a role in keeping pastures grassy."

Elephants and impalas can withstand S. campylacanthum's poison because they belong to a class of herbivores known as "browsers" that subsist on woody plants and shrubs, many species of which pack a toxic punch, Pringle said. On the other hand, "grazers" such as cows, sheep and zebras primarily eat grass, which is rarely poisonous. These animals easily succumb to the Sodom apple. A 2011 study on sheep published in the journal Kenya Veterinarian showed that the plant caused emphysema, pneumonia, bleeding ulcers, brain swelling and death, among other effects.

As more African savanna is converted into pasture, the proliferation of the Sodom apple may only get worse, Pringle said, which means that the presence of elephants to eat it may become more vital to the ecosystem and livestock. The Sodom apple thrives on ecological mayhem, such as the stress of overgrazing put on the land, Pringle said: "Typically, people will overload the land with more cattle than it can support. Then they remove the animals that eat the plant."

Ricardo Holdo, a savanna ecologist and assistant professor of biological sciences at the University of Missouri, said that the researchers present enough data to potentially determine the amount of pastureland that wild Sodom-apple eaters would be able to keep free of the noxious plant. Holdo, who is familiar with the research but had no role in it, said that beyond removing the Sodom apple, animals such as elephants and impalas could potentially increase the food available to cattle. This is a departure from the conventional view in Africa that livestock and wild animals compete for the same scarce resources, he said.

"There is enough quantitative information in this paper that they can probably model this effect in a meaningful way," Holdo said. "When you add the wild [herbivores], they have a negative effect on the Solanum, so they're actually promoting a higher biomass of high-quality habitat for livestock. So, it's a win-win in the sense that you're creating a situation in which you can both have livestock and wild animals, and probably actually increase your yield for livestock."

The researchers report that they have presented one of the first studies to examine "functional redundancy" in land animals. Functional redundancy refers to the situation in which one species declines or goes extinct and another species steps in to fulfill the same ecological role. This consideration helps ecologists predict the overall effect of extinction on an entire ecosystem. In this case, the effect of large mammals such as elephants and impalas on the Sodom apple population — and perhaps the populations of other plants — is unlikely to be duplicated by another animal species, the researchers found.

"That's an important question because some species are quite vulnerable to extinction and others aren't," Pringle said. "The ones that go first tend to be the biggest, or the tastiest, or the ones with ivory tusks. We're trying to gauge how the world is changing, and we need to understand to what extent these threatened animals have unique ecological functions."

The majority of studies on functional redundancy have been conducted in aquatic systems because large land animals can be hard to control in an experiment, Holdo said. The Princeton-led study is made more robust by being unusually long by ecology standards, he said — the researchers observed similar patterns year after year.

"A big part of the reason we don't understand functional redundancy very well in terrestrial ecosystems is because it's difficult to manipulate land species," he said. "Doing these experiments in the kind of environment like you have in Kenya is really challenging — keeping elephants out of anything is really a huge challenge."

An unexpected feast: Elephants, impalas and a taste for Solanum

Pringle was roughly three years into a study about the effects of elephants on plant diversity when he noticed that the Sodom apple was conspicuously absent from some experiment sites. He and other researchers had set up 36 exclosures — which are designed to keep animals out rather than in — totaling nearly 89 acres (36 hectares) at the Mpala Research Center in Kenya, a multi-institutional research preserve with which Princeton has been long involved. There were four types of exclosure: one type open to all animals; another where only elephants were excluded; one in which elephants and impalas were excluded; and another off limits to all animals.

It was in the sites that excluded elephants and impala that the Sodom apple particularly flourished, Pringle said, which defied everything he knew about the plant.

"This study was really fortuitous. I had always thought that these fruits were horrible and toxic, but when I saw them in the experiment, I knew some animal was otherwise eating them. I just didn't know which one," Pringle said. "The question became, 'Who's eating the apple?' It's a very interesting and simple question, but once you get the answer it raises a lot of other questions."

Using the exclosures established for the original experiment, Pringle and his co-authors used cameras to document the zest with which wild African browsers will eat S. campylacanthum. Pringle worked with Corina Tarnita, a Princeton mathematical biologist and assistant professor of ecology and evolutionary biology, as well as with collaborators from the University of Wyoming, the University of Florida, the University of California-Davis, the Mpala Center and the University of British Columbia.

The researchers specifically observed the foraging activity of elephants, impalas, small-dog-sized antelopes known as dik-diks, and rodents. They captured about 30,000 hours of foraging using cameras they had focused on particular plants. The researchers also marked several hundred Sodom-apple fruit to track how many were eaten, and measured the average height, mortality and reproducibility of Sodom-apple plants in all the exclosures.

The Sodom apple proliferated with each group of animal that was excluded. At one point, the plant's density was three-times greater in areas restricted to all animals than those that permitted all of them, the researchers report. In February 2011, the researchers counted an average of less than one fruit per plant in the exclosure open to all animals, meaning that nearly every fruit produced by the plants was being consumed. In the plots closed to elephants, that average increased to three fruits per plant. When both impala and elephants were kept away, the average jumped to around 50 fruits per plant, and fruits were more likely to be eaten by insects rather than dik-diks or rodents.

There is a catch to the elephants' and impalas' appetite for the Sodom apple: When fruit goes in one end, seeds come out the other. Though some seeds are destroyed during digestion, most reemerge and are potentially able to germinate.

Pringle and Tarnita developed a mathematical model to conduct a sort of cost-benefit analysis of how the Sodom apple's ability to proliferate is affected by being eaten. The model weighed the "cost" to the plant of being partially consumed against the potential benefit of having healthy seeds scattered across the countryside in an animal's droppings. They then used the model to determine whether different animal species had an overall positive or negative influence on the population of Sodom-apple plants.

While elephants ate an enormous amount of Solanum seeds, they also often destroyed the entire plant, ripping it out of the ground and stuffing the whole bush into their mouths. The model showed that to offset the damage an elephant wreaks on a plant, 80 percent of the seeds the animal eats would have to emerge from it unscathed. On top of that, each seed would have to be 10-times more likely to take root than one that simply fell to the ground from its parent.

Impalas, on the other hand, can have a positive overall effect on the plants, the researchers found. Impalas ate the majority of the fruit consumed — one impala ate 18 fruit in just a few minutes. But they do not severely damage the parent plant while feeding and also spread a lot of seeds in their dung. Of the seeds eaten by an impala, only 60 percent would need to survive, and those seeds would have to be a mere three-times more likely to sprout than a seed that simply fell from its parent.

"A model allows you to explore a space you're not fully able to reach experimentally," said Tarnita, who uses math to understand the outcome of interactions between organisms. "Once you've explored it, however, the conclusions and predictions need to be confronted with reality. This model helped us conclude that although it is theoretically possible for elephants to benefit the plant, that outcome is extremely unlikely."

The paper, "Low functional redundancy among mammalian browsers in regulating an encroaching shrub (Solanum campylacanthum) in African savannah," was published in the June 22 edition of the Proceedings of the Royal Society B. The work was supported by the National Science Foundation (grant OISE-0852961), the National Sciences and Engineering Research Council of Canada, the Sherwood Family Foundation, the National Geographic Committee for Research and Exploration (grant CRE-9291-13), and the Princeton Environmental Institute's Grand Challenges Program. 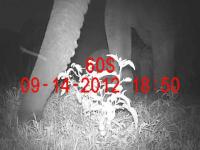 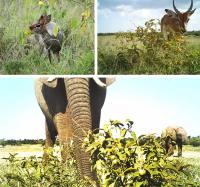