Before a male damselfly hot-headedly enters into a duel of aerial sparring, it first works out its strategy. It gives its opponent's wings a once-over to assess its strength, knowing that less transparent wings and larger red spots generally show a stronger rival. Those who then decide to engage in long fights either try to wear their opponent down, or dazzle them with brilliant aerial moves that are too hard to follow. These damselfly war game strategies are set out in a study published in Springer's journal The Science of Nature - Naturwissenschaften. Two research groups united forces to arrive at these findings, one based in Brazil, led by Rhainer Guillermo-Ferreira, and the other in Germany, led by Stanislav Gorb.

Male Mnesarete pudica damselflies, like many other winged insects, engage in energy-consuming aerial stand-offs to secure the best mates and territory. To find out how these insects decide whether or not to take up a challenger, Guillermo-Ferreira and his colleagues conducted fieldwork at a stream in Sao Paulo State in Brazil. Among other things, they filmed territorial fights and experimentally manipulated the wing pigmentation of some males.

The researchers realized that strong male damselflies probably adopt various decision-making strategies and steps before and while they take on a challenger of different strengths. To assess whether an opponent is weak or not, they first take wing pigmentation into account. Males with less transparent wings and bigger red spots are usually stronger.

Strong males tend to solve conflicts against weaker opponents through less energy-taxing, but much more aggressive, tactics such as chasing, grabbing, and biting. Because weaker males have less energy to fight, they only engage in brief pursuits without making too much effort during aerial displays.

When two strong opponents take each other on they will limit their chances of injury by choosing to go head-to-head in non-contact aerial display fights that are longer and more intense. In such cases males generally use two strategies. Through the so-called war-of-attrition strategy they physically try to wear their opponents down through repeated attacks. Threat displays, which are typical of longer fights, are then used until one of the contestants reaches his physical limits and withdraws.

The strong males could also follow a sequential assessment model in which they regularly take a step back mid-fight to assess the situation to decide whether it's worth their while to continue or not. In such cases, aerial displays of increasing difficulty are performed until the first damselfly is not able to perform a routine and gives up.

"Even animals with simple nervous systems, such as damselflies and other insects, may exhibit complex assessment strategies," says Guillermo-Ferreira. 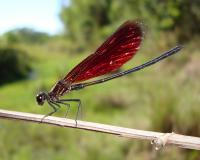