Concrete is one of the most abundant and durable building materials used in modern-day infrastructures, but it has a weakness--ice--which can cause it to crumble and spall. Now, inspired by organisms that survive in sub-zero environments, researchers in Colorado are introducing polymer molecules with anti-freezing abilities into concrete. The method, which tests if the new concrete can stop the damage caused by freezing and thawing, appears in the journal Cell Reports Physical Science on May 27.

Concrete is a porous material with capillary pores that allow water to permeate into the material. For places that experience large temperature swings, concrete roads and buildings go through "freeze-thaw cycles." The water freezes and expands inside of the material, building up pressure as the ice crystals grow, eventually popping the surface of the concrete off. The polyethylene glycol-graft-polyvinyl alcohol (PEG-PVA) molecules that the researchers have identified appear to keep the ice crystals small and prevent them from coalescing into larger crystals.

"We're particularly excited because this represents a departure away from more than 70 years of conventional concrete technology," says senior author Wil Srubar, who heads the Living Materials Laboratory at the University of Colorado Boulder. "In our view, it's a quantum leap in the right direction and opens the door for brand new admixture technologies."

For over 70 years, the primary way to mitigate freeze-thaw damage was to put in tiny air bubbles that act as pressure release valves inside of the concrete, known as air-entraining admixtures. But putting tiny air bubbles into the concrete not only lowers the strength of the material but also makes it more porous, acting like a superhighway for more water and other harmful substances, like salts, to enter. Instead of tackling the symptoms of ice expansions, the team decided to target the source: ice crystal growth.

Found in organisms that survive in sub-zero environments, anti-freeze proteins bind to ice crystals to inhibit their growth that would otherwise be fatal to the organisms. Inspired by the protein, the team introduced polymer molecules that mimicked the protein's properties to the concrete mix. The molecules effectively reduced the size of ice crystals by 90 percent. The new concrete mix also withstood 300 freeze-thaw cycles and maintained its strength.

Although the new concrete passed industry-standard tests, there are still questions about the true long-term resilience of the material in a real-world application and its economic viability. The next step for the team is to optimize their method by identifying new molecules that are more cost-effective and testing the compatibility of the molecule with different recipes of concrete. "Making concrete is a lot like baking a cake," says Srubar, hoping that concrete recipes can benefit from the new additive.

"For the next 30 years, the world will be building a New York City every 35 days, which is astounding," says Srubar. "What that means is that we're going to be building a lot of buildings and roads, and we're going to be using a lot of concrete. Because it has significant impacts on the environment, the concrete that we do make really does have to be as sustainable as possible and as durable as it can be."

This work was supported by the US National Science Foundation and the National Highway's Cooperative Research Program. 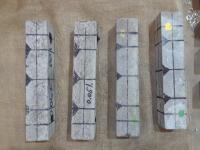