WEST LAFAYETTE, Ind. - New research findings point toward a class of compounds that could be effective in combating infections caused by enterovirus D68, which has stricken children with serious respiratory infections and might be associated with polio-like symptoms in the United States and elsewhere.

The researchers have used a technique called X-ray crystallography to learn the precise structure of the original strain of EV-D68 on its own and when bound to an anti-viral compound called "pleconaril." The ongoing research could lead to the development of drugs that inhibit infections caused by the most recent strains of the virus, said Michael G. Rossmann, Hanley Distinguished Professor of Biological Sciences at Purdue University.

A molecule called a "pocket factor" is located within a pocket of the virus's protective shell, called the capsid. When the virus binds to a human cell, the pocket factor is squeezed out of its pocket resulting in the destabilization of the virus particle, which then disintegrates and releases its genetic material to infect the cell and to replicate itself.

The findings are detailed in a paper appearing in the journal Science on Friday (January 2). The paper was authored by Yue Liu, a graduate student; Ju Sheng, a technical assistant; Andrei Fokine, Geng Meng, Woong-Hee Shin, and Feng Long, post doctoral research associates; Richard Kuhn, professor and head of Purdue's Department of Biological Sciences; Daisuke Kihara, a professor of biological sciences and computer science; and Rossmann.

"In this work we only focused on the very original EV-D68 isolate, which was discovered in 1962," Liu said. "Strains in the current outbreaks have minor differences."

Although pleconaril is not active against current strains of EV-D68 tested thus far, it is active against the original isolate. Small changes in the structure of pleconaril are likely to lead to anti EV-D68 inhibitors against a broader spectrum of isolates.

An upsurge of EV-D68 cases in the past few years has shown clusters of infections worldwide. In August 2014 an outbreak of mild-to-severe respiratory illnesses occurred among thousands of children in the United States of which 1,149 cases have been confirmed to be caused by EV-D68. The virus also has been associated with occasional neurological infections and "acute flaccid myelitis," characterized by symptoms including muscle weakness and paralysis. Although EV-D68 has emerged as a considerable global public health threat, there is no available vaccine or effective antiviral treatment.

Research led by Rossmann, working with pharmaceutical companies, has resulted in antiviral drugs for other enteroviruses such as rhinoviruses that cause common cold symptoms. These drugs include pleconaril, which was developed in the 1990s but not approved by the U.S. Food and Drug Administration primarily because of a side effect that puts women using birth control drugs at risk of conception.

Purdue researchers became interested in studying pleconaril's potential effectiveness against EV-D68 after an outbreak of about 20 cases of acute flaccid paralysis was reported in California between 2012 and 2014. Out of those cases, two tested positive for EV-D68.

"This suggests the potential association of EV-D68 with polio-like illness," Liu said.

The researchers are working with the Centers for Disease Control and Prevention and are studying these newer strains to determine their structures.

"The need for an effective antiviral agent for treatment of EV-D68 infections was made apparent by the widespread and large numbers of EV-D68 infections (in 2014), many of which were associated with significant morbidity," said Mark A. McKinlay, director of the Center for Vaccine Equity at the Task Force for Global Health. "The determination of the structure of the EV-D68 reported here by Michael Rossmann and his team represents an important step in this direction. The strain of EV-D68 used in the study is from 1962, and Michael's team along with Steve Oberste's group at CDC have shown that this strain is inhibited by pleconaril at clinically achievable concentrations. Testing of pleconaril against the current circulating strains at CDC thus far showed these strains are not susceptible to the antiviral compound."

McKinlay, who collaborates with the CDC on polio eradication efforts, has been a key figure in pharmaceutical-company collaborations with Rossmann's group to discover and develop pleconaril.

Once the newer strains are better understood, the ongoing research could yield compounds that are effective against these strains.

"Designing the best possible compound for these newer strains will take more time, but I hope that in a year or so we might have something," Rossmann said.

Rossmann and Kuhn as well as David Stuart's team in Oxford, England, working with Zihe Rao's group in Beijing were among the first scientists to reveal important details of the structure of enterovirus 71, or EV71, which causes hand, foot and mouth disease, and is common throughout the world. Although that disease usually is not fatal, the virus has been reported to cause fatal encephalitis in infants and young children, primarily in the Asia-Pacific region.

Rossmann's and Kuhn's collaborative research has looked at virus structures in complex with receptors that permit entry of the virus into cells, and inhibitors of virus replication for a variety of viruses.

Like EV-D68 and EV71, poliovirus is an enterovirus and is within the large family called picornaviruses. Non-polio enteroviruses are common viruses and cause about 10 to 15 million infections in the United States each year, but most infected individuals have only mild illness, similar to a common cold, according to the CDC.

The research was supported by the National Institutes of Health.

Structure and inhibition of EV-D68, a virus that causes respiratory illness in children

Enterovirus D68 (EV-D68) is a member of Picornaviridae and is a causative agent of recent outbreaks of respiratory illness in children in the USA. We report here the crystal structures of EV-D68 and its complex with pleconaril, a capsid binding compound that had been developed as an anti-rhinovirus drug. The hydrophobic drug binding pocket in viral protein 1 contained density that is consistent with a fatty acid of about 10 carbon atoms. This density could be displaced by pleconaril. We also showed that pleconaril inhibits EV-D68 at a half maximal effective concentration of 430 nanomolar and might, therefore, be a possible drug candidate to alleviate EV-D68 outbreaks. 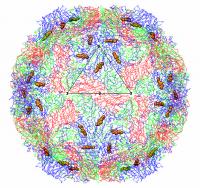