Super-sharp observations with the telescope Alma have revealed what seems to be a gigantic flare on the surface of Mira, one of the closest and most famous red giant stars in the sky. Activity like this in red giants - similar to what we see in the Sun - comes as a surprise to astronomers. The discovery could help explain how winds from giant stars make their contribution to our galaxy's ecosystem.

New observations with Alma have given astronomers their sharpest ever view of the famous double star Mira. The images clearly show the two stars in the system, Mira A and Mira B, but that's not all. For the first time ever at millimetre wavelengths, they reveal details on the surface of Mira A.

"Alma's vision is so sharp that we can begin to see details on the surface of the star. Part of the stellar surface is not just extremely bright, it also varies in brightness. This must be a giant flare, and we think it's related to a flare which X-ray telescopes observed some years ago", says Wouter Vlemmings, astronomer at Chalmers University of Technology, who led the team.

The team's results were recently published in the journal Astronomy & Astrophysics.

Red giants like Mira A are crucial components of our galaxy's ecosystem. As they near the end of their lives, they lose their outer layers in the form of uneven, smoky winds. These winds carry heavy elements that the stars have manufactured - out into space where they can form new stars and planets. Most of the carbon, oxygen, and nitrogen in our bodies was formed in stars and redistributed by their winds.

Mira - the name means "Wonderful" in Latin - has been known for centuries as one of the most famous variable stars in the sky. At its brightest, it can be clearly seen with the naked eye, but when it's at its faintest a telescope is needed. The star, 420 light years away in the constellation Cetus, is in fact a binary system, made up of two stars of about the same mass as the sun: one is a dense, hot white dwarf and the other a fat, cool, red giant, orbiting each other at a distance about the same as Pluto's average distance from the Sun.

"Mira is a key system for understanding how stars like our sun reach the end of their lives, and what difference it makes for an elderly star to have a close companion", says Sofia Ramstedt, astronomer at Uppsala University and co-author on the paper.

The Sun, our closest star, shows activity powered by magnetic fields, and this activity, sometimes in the form of solar storms, drives the particles that make up the solar wind which in its turn can create auroras on Earth.

"Seeing a flare on Mira A suggests that magnetic fields also have a role to play for red giants' winds", says Wouter Vlemmings.

The new images give astronomers their sharpest ever view of Mira B, which is so close to its companion that material flows from one star to the other.

"This is our clearest view yet of gas from Mira A that is falling towards Mira B" says Eamon O'Gorman, astronomer at Chalmers and member of the team.

The observations were carried out as part of Alma's first long-baseline observations. By placing the telescope's antennas at their maximum distance from each other, Alma reached its maximum resolution for the first time. Mira was one of several targets in the campaign, alongside a young solar system, a gravitationally lensed galaxy and an asteroid. Now Wouter Vlemmings and his team plan new observations of Mira and other similar stars.

"Alma has shown us details on the surface of Mira for the first time. Now we can begin to discover our closest red giants in detail that hasn't previously been possible", he says. 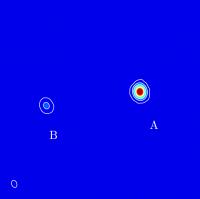