Daniel Speiser, a postdoctoral fellow in the Department of Ecology Evolution and Marine Biology at UC Santa Barbara, studied mollusks that he collected in the Florida Keys. His research of their vision, performed during his graduate studies at Duke University, resulted in a study published today by Current Biology.

The three-inch-long mollusks, called chitons, have hundreds of eye-like structures with lenses made of aragonite, a type of rock. It's the first time scientists have found an animal that makes eye lenses from aragonite and not the rock's close cousin, calcite.

Scientists discovered the chiton's unique eyes decades ago. But it wasn't clear whether chitons used these eyes to see objects overhead, or simply to sense changes in light. "Turns out they can see objects, though probably not well," said Speiser.

"It's surprising how these creatures make their eyes from rocks," said Sönke Johnsen, associate professor of biology at Duke. Most animals make their eyes from cells with proteins and chitin. "But it seems like an easy way to evolve eyes, by using what you've already got," he said. Chitons also make their shells from aragonite.

Johnsen and Speiser studied West Indian fuzzy chitons, or Acanthopleura granulata, which have flat shells made of eight separate plates. Hundreds of tiny lenses on the surface of the plates cover clusters of light-sensitive cells beneath.

To test the creature's vision, Speiser placed individual chitons on a slate slab. When left undisturbed, they lift part of their armored, oval-shaped body to breathe. At this point, Speiser showed them either a black disk ranging from .35 centimeters to 10 centimeters in diameter or a corresponding gray slide that blocked the same amount of light. The disk or slide appeared 20 centimeters above the chitons.

When shown the gray screens, the chitons did not respond. But they clamped down when shown a black disk three centimeters or larger in diameter. That would be the equivalent of humans looking in the sky and seeing a disk the diameter of 20 moons, making human vision about a thousand times sharper than chiton vision, Johnsen said.

Because the chitons responded to the larger disks and not the gray slides, they seem to be seeing the disk and not simply responding to a change in light, said University of Sussex biologist Michael Land, an expert on animal vision who was not involved in the research. It's not yet clear if they respond only to the removal of light by the disk as opposed to added light.

Land also said it's not likely that the chitons' eyes were part of the evolutionary route to human eyes.

Chitons are an ancient, primitive species that first appeared on Earth more than 500 million years ago. But the oldest chitons with eyes only began to appear in the fossil record in the last 25 million years, making their eyes among the most recent to evolve in animals. Speiser said chitons probably evolved to have eyes with lenses so they could see their predators and defend themselves against being eaten.

Speiser and his colleagues also tested whether the chitons' eyes work in both air and water, since some species spend time in both. The experiments made a strong case for the chiton lens being able to focus light differently, depending on whether the animal is above or below water, Land said.

Bending Light in the Chiton's Eye 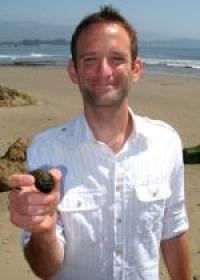