If you live with seasonal allergies and feel like the pollen seasons feel longer and longer every year, you may be right. New research shows that pollen seasons start 20 days earlier, are 10 days longer, and feature 21% more pollen than in 1990—meaning more days of itchy, sneezy, drippy misery.

Led by William Anderegg of the University of Utah School of Biological Sciences, the researchers found that human-caused climate change played a significant role in pollen season lengthening and a partial role in pollen amount increasing. Their research, funded by the David and Lucille Packard Foundation, the National Science Foundation and the USDA National Institute of Food and Agriculture, is published in Proceedings of the National Academy of Sciences.

"The strong link between warmer weather and pollen seasons provides a crystal-clear example of how climate change is already affecting peoples' health across the U.S.," says Anderegg.

Allergies to airborne pollen can be more than just a seasonal nuisance to many. Allergies are tied to respiratory health, with implications for viral infections, emergency room visits and even children's school performance. More pollen, hanging around for a longer season, makes those impacts worse.

Although previous studies found that increases in temperature and atmospheric carbon dioxide--hallmarks of human-caused climate change--can cause more pollen production in greenhouse experiments, and that small-scale studies show worsening of pollen seasons in some locations or in some plants correlated with temperature, scientists hadn't yet looked at pollen trends at a continental scale or calculated the likely contribution of climate change. That's exactly what Anderegg and his colleagues set out to do.

"A number of smaller-scale studies - usually in greenhouse settings on small plants - had indicated strong links between temperature and pollen," Anderegg notes. "This study reveals that connection at continental scales and explicitly links pollen trends to human-caused climate change."

The team compiled measurements between 1990 and 2018 from 60 pollen count stations across the United States and Canada, maintained by the National Allergy Bureau. (Find the map of stations here.) These stations collect airborne pollen and mold samples, which are then hand-counted by certified counters.

Although nationwide pollen amounts increased by around 21% over the study period, the greatest increases were recorded in Texas and the Midwestern U.S., and more among tree pollen than among other plants.

Pollen seasons today start around 20 days earlier than in 1990, suggesting that warming is causing the plants' internal timing (also called its phenology) to start producing pollen earlier in the year.

What's climate change got to do with it?

But can we say that the changes in pollen are a result of climate change? The researchers answered that question by applying statistical methods to the pollen trends in conjunction with nearly two dozen climate models.

"Climate change isn't something far away and in the future. It's already here in every spring breath we take and increasing human misery," says Anderegg. "The biggest question is--are we up to the challenge of tackling it?" 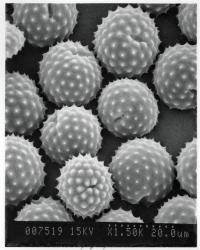