Daejeon, Republic of Korea, April 17, 2014 – The way electronic devices receive their power has changed tremendously over the past few decades, from wired to non-wired. Users today enjoy all kinds of wireless electronic gadgets including cell phones, mobile displays, tablet PCs, and even batteries. The Internet has also shifted from wired to wireless. Now, researchers and engineers are trying to remove the last remaining wires altogether by developing wireless power transfer technology.

Chun T. Rim, a professor of Nuclear & Quantum Engineering at KAIST, and his team showcased, on April 16, 2014 at the KAIST campus, Daejeon, Republic of Korea, a great improvement in the distance that electric power can travel wirelessly. They developed the "Dipole Coil Resonant System (DCRS)" for an extended range of inductive power transfer, up to 5 meters between transmitter and receiver coils.

Since MIT's (Massachusetts Institute of Technology) introduction of the Coupled Magnetic Resonance System (CMRS) in 2007, which used a magnetic field to transfer energy for a distance of 2.1 meters, the development of long-distance wireless power transfer has attracted much attention for further research.

However, in terms of extending the distance of wireless power, CMRS, for example, has revealed technical limitations to commercialization that are yet to be solved: a rather complicated coil structure (composed of four coils for input, transmission, reception, and load); bulky-size resonant coils; high frequency (in a range of 10 MHz) required to resonate the transmitter and receiver coils, which results in low transfer efficiency; and a high Q factor of 2,000 that makes the resonant coils very sensitive to surroundings such as temperature, humidity, and human proximity.

Professor Rim proposed a meaningful solution to these problems through DCRS, an optimally designed coil structure that has two magnetic dipole coils, a primary one to induce a magnetic field and a secondary to receive electric power. Unlike the large and thick loop-shaped air coils built in CMRS, the KAIST research team used compact ferrite core rods with windings at their centers. The high frequency AC current of the primary winding generates a magnetic field, and then the linkage magnetic flux induces the voltage at the secondary winding.

Scalable and slim with a size of 3 m in length, 10 cm in width, and 20 cm in height, DCRS is significantly smaller than CMRS. The system has a low Q factor of 100, showing 20 times stronger against the environment changes, and works well at a low frequency of 100 kHz. The team conducted several experiments and achieved promising results: for instance, under the operation of 20 kHz, the maximum output power was 1,403 W at a 3-meter distance, 471 W at 4-meter, and 209 W at 5-meter. For 100 W of electric power transfer, the overall system power efficiency was 36.9% at 3 meters, 18.7% at 4 meters, and 9.2% at 5 meters.

"With DCRS," Professor Rim said, "a large LED TV as well as three 40 W-fans can be powered from a 5-meter distance."

"Our technology proved the possibility of a new remote power delivery mechanism that has never been tried at such a long distance. Although the long-range wireless power transfer is still in an early stage of commercialization and quite costly to implement, we believe that this is the right direction for electric power to be supplied in the future. Just like we see Wi-Fi zones everywhere today, we will eventually have many Wi-Power zones at such places as restaurants and streets that provide electric power wirelessly to electronic devices. We will use all the devices anywhere without tangled wires attached and anytime without worrying about charging their batteries."

Professor Rim's team completed a research project with the Korea Hydro & Nuclear Power Co., Ltd in March this year to remotely supply electric power to essential instrumentation and control equipment at a nuclear power plant in order to properly respond to an emergency like the one happened at the Fukushima Daiichi nuclear plant. They succeeded to transfer 10 W of electricity to the plant that was located 7 meters away from the power base.

The research result was published in the March 2014 issue of IEEE Transactions on Power Electronics. 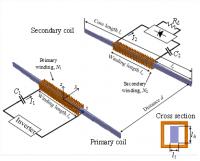 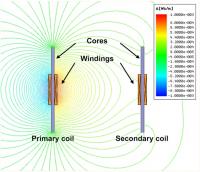