December 22nd, 2016 - A discovery of high relevance in medical research will be published in Volume 55, number 4 of December 2016 of the prestigious "Journal of Alzheimer's Disease (JAD)", entitled "Tau Platelets Correlate with Regional Brain Atrophy in Patients with Alzheimer's Disease". This paper has been highlighted as one of the most important contribution to this field. The paper stems from a fruitful collaboration between the neuroscience laboratory from the International Center for Biomedicine (ICC) under the leadership of Dr. Ricardo Maccioni and the research teams of Drs. Andrea Slachevsky, Faculty of Medicine, University of Chile, together with Drs. Oscar Lopez and James Becker from University of Pittsburgh, School of Medicine, USA.

Drs. Maccioni and Farías have pioneered the technology that detects in human blood platelets the pathological oligomeric forms of brain tau protein in patients with Alzheimer's disease (AD) and other neurodegenerative disorders. More importantly, the ratio between this anomalous tau and the normal tau protein can discriminate AD patients from normal controls, and are associated with decreased cognitive impairment. These studies open a new avenue in the development of highly sensitive and efficient biomarkers for neurodegenerative disorders. The fact that pathological forms of tau proteins in platelets correlated with decreased brain volume in areas known to be associated with AD pathology in the brain is one step forward for the use of peripheral biomarkers, not only for clinical purposes, but also for research studies oriented to understand the complexity of AD pathology.

This article, highlighted by JAD, proved that the relationship between the pathological and normal variants of tau were associated with the reduction of cerebral volume in key structures linked with the disease. These structures included the left medial and right anterior cingulate gyri, right cerebellum, right thalamus (pulvinar), left frontal cortex, and right parahippocampal region, in agreement with MRI neuroimaging approaches. In addition to the enormous utility of this non-invasive technology for the detection and progression of AD, the use of a tau biomarker could lead to the identification of AD pathology before the clinical symptoms are evident, and it could play an essential role in the development of preventive therapies. Moreover, the determination of peripheral tau markers in platelets can contribute to the understanding of the pathophysiology of multiple neurodegenerative processes where tau proteins play a critical role.

Promising discovery for a non-invasive early detection of Alzheimer's disease 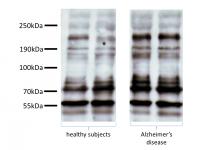