A new study led by University of Maryland (UMD) scientists conducted novel climate and vegetation model experiments to show that wind and solar farms could lead to a more than doubling of rainfall in the Sahara and an increase of up to about 20 inches (500 mm/year) in the Sahel, a semi-arid transition region that lies south of the Sahara.

Large-scale wind and solar farms in the Sahara could provide enough energy to replace the fossil fuel energy used currently and in the foreseeable future. The primary effect of such renewable energy farms would be a substantial reduction of human-generated greenhouse gas emissions and the resulting mitigation of climate change. However, such large-scale wind and solar farms could also affect regional climate due to changes to land surface properties. An international group of researchers, led by UMD scientists, explored such climate impacts by including bidirectional vegetation feedbacks between a global climate model and a land/vegetation model. Their findings were published today in Science.

"Our model results show that large-scale solar and wind farms in the Sahara would more than double the precipitation in the Sahara, and the most substantial increase occurs in the Sahel, where the magnitude of rainfall increase is between ~200 and ~500 mm per year," said Yan Li, a lead author of the paper who was a UMD postdoctoral researcher when the study began and is now at the University of Illinois at Urbana-Champaign. "As a result, vegetation cover fraction increases by about 20 percent."

"Precipitation increases predicted by our model would lead to substantial improvements of rainfed agriculture in the region, and vegetation increases would lead to the growth in production of livestock," said Safa Motesharrei, UMD Systems Scientist and a lead author of the paper. "The Sahara, the Sahel, and the Middle East include some of the driest regions in the world, while experiencing high growth of population and poverty. Our study has major implications for addressing the intertwined sustainability challenges of the Energy-Water-Food nexus in this region."

"Moreover, the availability of vast quantities of clean energy would allow for desalination of seawater and transporting it to the regions that suffer most from severe freshwater scarcity, in turn, leading to improvement of public health, expansion of agriculture and food production, and even restoration of biodiversity" added Motesharrei about the broader societal, economic, and ecological impacts of their novel scientific findings.

"This study accomplishes something completely new: it looks at how human action can affect the land surface through construction of solar and wind farms, and shows that for land use change of this magnitude, it is fundamental to look at the impact on regional climate using global climate models that account for land-atmosphere feedbacks," said Paolo D'Odorico, Professor of Ecohydrology at the University of California, Berkeley, who was not a co-author.

"In 1975 Jule Charney, my PhD advisor at MIT, proposed a feedback mechanism to help explain the drought in the Sahel, the semi-arid transition region south of the Sahara: Overgrazing increased surface albedo [reflectivity], reduced precipitation, and in turn further reduced vegetation," said Eugenia Kalnay, University of Maryland Distinguished University Professor and a lead author of the paper. "About a decade ago, I had the idea that this feedback would work in the opposite direction in the presence of large solar panel farms, since these would reduce the surface albedo. Similarly, wind farms would increase land surface friction and convergence of air, thus producing upward motion and precipitation. This is a second feedback mechanism that was discovered by Y.C. Sud in 1985, but again in the opposite direction. These feedback mechanisms suggest that both large wind and solar farms in the Sahara would significantly increase precipitation and vegetation. Our results support this conclusion." (See Figure.)

"Solar and wind power projects in Africa and the Middle East are already underway, from Morocco to Dubai to Ethiopia, including over 200 GW of solar power planned by 2030," said co-author Jorge Rivas, a political scientist. "This renewable electricity could be transported to regions a few thousand kilometers away, and long-distance transmission lines have already existed in Africa and elsewhere for decades."

This study shows "that dynamic vegetation feedback could enhance the impact of land use changes on climate in this specific region [Sahara and Sahel]," said Guiling Wang, a Professor of Hydroclimatology at the University of Connecticut, who was not a co-author. "Studies using models with static [prescribed] vegetation may underestimate the effects on regional climate of anthropogenic activities such as deforestation or wind and solar farms."

"These experiments with dynamic vegetation feedback in our model show that the positive precipitation-vegetation-albedo feedback accounts for about 80 percent of the simulated precipitation increase in the wind farm experiments," said co-author Eviatar Bach, PhD Candidate at the UMD Department of Atmospheric and Oceanic Science (AOSC). The dynamic vegetation model was developed by co-author Ning Zeng, a Professor at UMD AOSC, and coupled into the global climate model developed by co-author Fred Kucharski, a climate scientist at the International Center for Theoretical Physics in Italy.

"While it was known that surface roughness and albedo can affect climate and rainfall, the conclusion that including dynamic vegetation would lead to a strong positive feedback in rainfall is new," said J. Shukla, a renowned climate scientist and Distinguished University Professor of Climate Dynamics at George Mason University, who was not a co-author. "This research certainly suggests that it will be possible to create a self-sustaining renewable energy system, which will be greatly beneficial for the socioeconomic development of the region."

"The Sahara has been expanding for some decades, and solar and wind farms might help stop the expansion of this arid region," said Russ Dickerson, a leader on air quality research and a professor at UMD AOSC, who was not a co-author. "This looks like a win-win to me." he said. 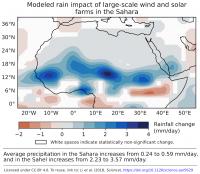