Hummingbirds' ability to accelerate and turn diminishes at high altitudes, but it isn't a lack of oxygen to the body that limits the birds' performance -- it's physics.

"It appears the mechanics of high-altitude flight slow down the birds well before their respiratory system has an issue handling the lower-oxygen environment," said zoologist Paolo Segre, author of a new study in Current Biology.

Segre and colleagues at the University of British Columbia captured male adult hummingbirds and transported them to the White Mountain Research Centre in California. The centre, situated at 3,800 metres (12,500 feet), allowed the researchers to evaluate the birds' ability to accelerate and turn, and compare them to baselines gathered closer to sea level.

"Hummingbirds' acceleration, rotation and turning skills are key to their ability to compete for food and defend territory," said UBC zoologist Douglas Altshuler, senior author on the paper.

"As climate change continues to increase temperatures around the globe, more and more species will be forced to seek out cooler regions, including at higher elevations."

The elevation of 3,800 metres (12,500 feet) put the birds just beyond the species' maximum range in terms of elevation, but this was enough to dramatically lower the birds' aerial performance.

Back at UBC, researchers wanted to pinpoint what was impacting the birds' maneuverability. They placed the birds in air-tight chambers, substituting alternative gases for oxygen.

One substitution simulated the lower oxygen supply of high altitudes, but meant the birds had adequate air density to generate lift with their wings. The other substitution kept the oxygen constant but lowered the air density. In low-oxygen conditions, the hummingbirds were able to perform manoeuvres similar to when at sea level, but in lower air density their agility decreased.

Segre, now with Stanford University, wants to continue the study with species of different sizes.

"Animals have good reason to want to perform well at high altitudes--there's less competition for food and fewer predators," said Segre. "But for aerial competitors like hummingbirds, there's also a high price to pay. It will be interesting to see whether the same factors apply across different body sizes and wing shapes." 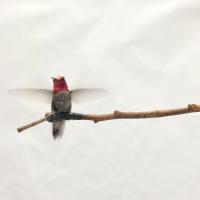 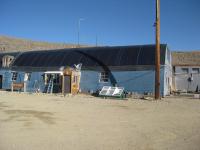