A study based on new high-resolution supercomputer simulations, published in this week's issue of the journal Science Advances, reveals that global warming will intensify landfalling tropical cyclones of category 3 or higher in the Indian and Pacific Oceans, while suppressing the formation of weaker events.

Tropical cyclones (including typhoons and hurricanes), are the most fatal and costliest weather disasters on our planet. Millions of people are affected every year by the destructive power of these extreme weather systems, but how tropical cyclone properties - in particular in coastal areas - will change in response to global warming has long remained a mystery. To address this question, scientists for over two decades have used the world's largest supercomputers to run climate model simulations that show important aspects of these destructive storms. However, until recently the computing power has been insufficient to capture both atmospheric details and resolve the full interaction with the ocean on a global scale.

A team of researchers from South Korea's IBS Center for Climate Physics (ICCP) at Pusan National University recently completed one of the most computing-intensive and detailed global warming simulations so far. The global climate model records small-scale atmospheric and oceanic processes with a horizontal scale of 25 km and 10 km, respectively. This unprecedented resolution is adequate to simulate tropical cyclones and oceanic cold wakes (Fig. 1), which are generated when a strong slowly moving tropical cyclone brings cold deep water up to the ocean surface, further influencing the track and intensity of tropical cyclones.

To determine the sensitivity of tropical cyclones to global warming, the research team ran computer model simulations for present-day atmospheric greenhouse gas composition and doubled and quadrupled CO2 concentrations. The simulations ran for 13 months on one of South Korea's fastest academic supercomputers named Aleph (Fig. 1), generating an equivalent of about two-thousand 1TB hard disks of data.

This climate computer model is also unique in other aspects. For example, it exhibits much weaker ocean temperature errors than the previous generation of climate models. "This improvement was important for a realistic simulation of typhoons in the Indian and Pacific Ocean" says Dr. Jung-Eun Chu, lead author of the study and a project leader at the ICCP.

Over the warm tropical oceans, air rises, flowing polewards at high altitude and sinking in the subtropical regions. The surface-return-flow of this so-called Hadley circulation feeds the global trade wind system. According to the new study, the summer-time Hadley circulation is expected to weaken in future due to the accelerated atmospheric warming at an elevation of 5-15 km, relative to the ground. "A future reduction of rising motion in the tropical atmosphere will make it more difficult for tropical cyclones to develop, which explains the projected future suppression in tropical cyclone seeds and overall numbers in the Pacific and Indian Ocean (Fig. 2)", explains Dr. Sun-Seon Lee from the ICCP, who conducted the simulations on Aleph. "Interestingly the simulated pattern of future tropical cyclone changes is quite similar to the recent observed trends, which supports the notion that global warming is already altering global extreme weather" adds Dr. Lee.

However, the story how global warming will alter tropical cyclones is more complex. Although for a CO2 doubling the total number of tropical cyclones is expected to decrease in future, developing events will have much higher chance to intensify beyond category 3 due to the higher humidity and energy levels in the atmosphere. "This result confirms previous studies which used less-detailed global climate models. By representing coastal processes more accurately than ever before in a global model, we now have a much higher confidence in these robust model projections, in particular for landfalling tropical cyclones.", says Prof. Axel Timmermann, co-author of the study and Director of the ICCP.

For even higher greenhouse gas concentrations (CO2 quadrupling), the research team discovered an important, previously unknown, saturation effect: beyond ~5? global warming, the suppression of tropical cyclone seeds is so strong that also the number of strong landfalling events (category 3 or higher) will begin to level off. "Nevertheless, the rainfall associated with each event will continue to increase, amplifying the risk for extreme coastal flooding. Our study provides crucial policy-relevant information for countries that are affected by the impact of tropical cyclones" says Dr. Chu.

The ICCP research team will continue to analyze the vast amount of data generated by these computer simulations to better understand the interaction between ocean heat content and tropical cyclones under present day and future conditions. 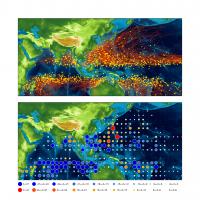