In a pair of studies, scientists have devised new vaccine-based and probiotic interventions that help prevent severe cholera infections in animal models. The findings are early, but could lead to new strategies for curbing the spread and severity of cholera, one of the world's most common and devastating infectious diseases. Despite the development of effective rehydration therapies and oral vaccines, cholera - caused by the Vibrio cholerae bacterium - still runs rampant in many areas of the developing world such as Haiti and Yemen due to a lack of infrastructure and water sanitation. Current vaccines against cholera can take weeks to induce immunity, which limits the effectiveness of vaccination campaigns during cholera epidemics that often explode within several days. With the goal of developing a faster-acting vaccine, Troy Hubbard and colleagues created a weakened strain of cholera called HaitiV - based on the strain responsible for the Haitian outbreak - and used it as the basis for a live oral vaccine. They administered the vaccine to infant rabbits one day before exposing them to lethal doses of cholera, and found it safely reduced illness severity and increased survival times in the animals. A modeling experiment showed that during a simulated cholera outbreak in a population of 100,000 people, a similarly rapid vaccine could prevent thousands of additional cases when compared to a slower traditional vaccine.

In the second study, Ning Mao and colleagues explored the possibility of harnessing friendly gut bacteria to make it harder for cholera to establish itself in the intestines. They zeroed in on a probiotic bacterial species named Lactococcus lactis, which is found in fermented milk products and produces an acid that V. cholerae is sensitive to. The authors found that orally administrating L. lactis to infant mice infected with cholera reduced the amount of cholera bacteria in the intestines and improved survival. The researchers also engineered a strain of L. lactis that produces an enzyme in the presence of cholera bacteria. This enzyme could then be detected in stool samples, serving as a warning tool and a potential method to improve surveillance in at-risk populations. In a related Focus, Robert Hall notes the two studies "showcase innovative approaches to combating the scourge of cholera."

A new vaccine and probiotic combat cholera in animal models 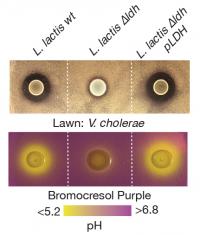